Romneys Ticket Talk Is Heating Up, reports todays Wall Street Journal in a GOP picture-perfect piece designed to deflect attention from embattled Republican presidential standard-bearer, who is getting beaten to a pulp from his self-inflicted wound of not releasing past income taxes. 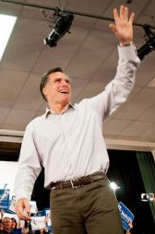 Romneys defense that the release of more information would give Team Obama more ammunition to fire back at him is laughable. Whats to hide?

Romneys dad, George, released a dozen years of back tax returns when he ran for the GOP presidential nomination. Everybody knows that Romney will be pressured to finally cave on the release. He should do it now, while the election is three and a half months away.

Will it be T-Paw or Private Ryan? How about Rick?

The bigger question: Who vetted Romney for the top post?

Mitt just outspent and outlasted the dubious cast of lightweights who either contended in the GOP primaries or used the process to promote their personal business interests. Each had a moment in the sun and then flamed out. Herman Cain for Prez? Cmon. Thrice-married Catholic convert Newtster? Give me a break.

Romney is the GOP candidate by default. Its supposed to be about choice.

Republicans had a good shot to win the presidency. Yet the best the party has to offer America is a job-destroying former Bain Capital CEO who runs away from his sole political achievement of RomneyCare and drones on and on about this president just doesnt understand how the economy works.

The GOP threw it all away. The partys future is about as bright as Mitts presidential chance.