Theyre coming back. In a move that rekindled mixed memories among Baby Boomers everywhere, DreamWorks Animation announced Tuesday the acquisition of Classic Media for $155M. 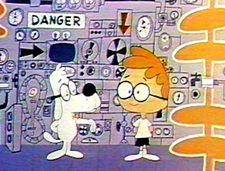 You either loved or hated them. Katzenberg, though, loves them all, telling Bloomberg the collection is an extraordinary library of characters.

Growing up in the 1960s, I was a big fan of Peabody and Sherman, Rocky & Bullwinkle, and Felix, a creation of the silent film era. Lassie, Casper, Archie and Gumby were pretty lame.

It will be interesting to see what plan DreamWorks has for Magoo. Updating the image of a nearsighted lunatic, who was based in part on the great W.C. Fields, seems to be a tough sell in todays fast-paced society. Also, Magoo is a member in good standing of the one percent crowd.

Another challenge for DreamWorks: Lamb Chop, the sock puppet made famous by Shari Lewis. Lamb Chop is joined by Hush Puppy, Charlie Horse and Wing Ding. Sock puppets have never recovered from the collapse of Pets.com, which become the poster boy of the dot-com bust.

DreamWorks has a lot to work with. It's acquiring a film collection of 450 titles and more than 6,000 episodes of animated and live-action programming. Katzenberg says a cable network may be in the works. He sees great promise in digitizing the Golden Books library, which has sold over 2B copies in more than 170 countries. China is a market tapped for growth.

Well get a hint of whats in store for Classic Media in December, when DreamWorks releases a 3D movie version of Mr. Peabody & Sherman on Christmas day.