Maxfield & Oberton, maker of the Buckyballs desktop magnets popular in offices, is relying on PR support as it faces extinction from an administrative complaint by the U.S. Consumer Product Safety Commission.

The CPSC, which says efforts to educate the public and increase the minimum age for the magnetic product have not reduced a swallowing hazard, on July 25 filed the complaint  essentially a lawsuit  against the New York-based company ordering that it stop selling its Buckyballs and Buckycubes products, notify the public of injury risk, and offer consumers a refund. 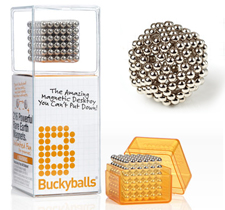 The CPSC complaint notes that more than two millions Buckyballs sets have been sold as well as more than 200,000 Buckycubes. The federal agency said it made the legal move only after M&O refused to implement a recall.

We will vigorously fight this action taken by President Obama's hand picked agency, said CEO Craig Zucker, in a statement from the PR firm.

Zucker contends that the federal agency warned retailers like Amazon and Brookstone to stop selling the product before filing its recent complaint. The retailers agreed to the request.

I don't understand how and why they did this without following their own rules before allowing us to make our case, added Zucker. It almost seems like they simply wanted to put our products and industry out of business.

CPSC and M&O worked together on a recall of 175,000 of the Buckyball magnet sets in 2010 because they were marketed to ages 13+ without meeting federal toy standards for magnets, which start at age 14. The two entities last year collaborated on a consumer safety video about the hazards of swallowing the magnets, but CPSC said it has learned of at least a dozen ingestion accidents since 2009, many requiring surgery.

The commission staff alleges in its complaint that it has concluded that despite the attempts to warn purchasers, warnings and education are ineffective and cannot prevent injuries and incidents with these rare earth magnets, the CPSC said in a statement.

As a small business owner I'm left wondering what to tell my employees and their families. How can this happen in America? said Zucker.