In enlisting Bill Clinton to play a major role at the Democratic convention in Charlotte, president Obama avoids the mistake made by Al Gore, who snubbed the former president during his own 2000 run for the White House. 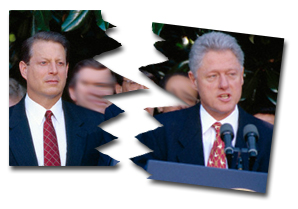 That poor decision bit Gore and cost him the Oval Office. Had Gore reached out to Clinton, there would not have been a Florida recount. With Clinton in his corner, Gore would have decisively won the Sunshine State.

Gores pettiness and arrogance hurt America. It led to the debacle of Iraq, a conflict that featured unnecessary deaths and a financial tab that will cost U.S. billions of dollars for years to come.

By campaigning for Obama, Clinton will remind voters that he presided over a record economic expansion that crumbled under subsequent Republican leadership. Clinton and vice president Joe Biden are a powerful tag team when it comes to appealing to working class voters, a block of voters who are put off Obamas coolness and failure to connect with "regular people."

Clinton though is far from a being a re-election lock for Obama. The former president was a top campaigner for the Democrats in the 2010 election year in which they were drubbed.

Clinton in 2010 enjoyed a 55 percent approval and 23 percent negative rating, according to a Wall Street Journal/NBC poll. He made more campaign appearances that Obama and Biden.

Yet Bill could not perform election magic even in his home state of Arkansas as Senator Blanche Lincoln lost against Republican John Boozman.

The former president failed in his effort to deliver the Kentucky Senate seat for Jack Conway against the radical Rand Paul. Despite Clinton's cheerleading, the Democrats lost control of the House.

Clinton will do far more good than bad for Democrats in 2012, but ultimately Americans will cast their votes based on Obamas four-year record. That means a very close election.