Are you gearing up for tomorrows Chick-fil-A Appreciation Day, the latest front (flap) in the so-called culture wars?

As a supporter of same-sex marriage, Im not going to run down to New York Citys sole Chick-fil-A outlet and chow down a spicy chicken sandwich or a bacon, egg and cheese biscuit. Nor will I return my now brownish New York University diploma to protest the location of the Chick-fil-A shop on the campus on my alma mater. 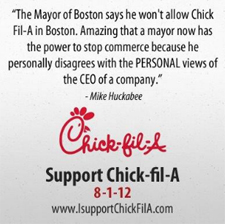 Publicity hounds like NYC Council president Christine Quinn -- the leading candidate, until Anthony Weiner gets into the race, to succeed Mayor Mike Bloomberg -- have demanded that the university cut its ties with Chick-fil-A.

NYU is hardly a hotbed of anti-gay marriage zealots. Its chicken shop is independently owned franchise of the Bible Belt-based Chick-fil-A. There are more than 1,600 other independently operated Chick-fil A outlets throughout the land, mostly down south. They employ many people in places that boast of few employment options.

Is it right to demand the shutdown of those Chick-fil-A outlets because of the views of Cathy? No!

Should support of gay marriage or any other social issue be a means test when deciding whether to eat at a local McDonalds or Burger King? Thats nuts.

Cathy has every right to express his view on same-sex marriage. My wife, daughter and I spent last weekend looking at colleges in Virginia and Washington. We drove by and passed on many Chick-fil-A outlets, an expression of our rights.

Chick-fil-A Appreciation Day is the brainchild of Mike Huckabee, the evangelical former presidential candidate and pride of Fox News. It has been embraced by celebrity politicos like Sarah Palin and nearly every conservative running for public office. Undoubtedly, Chick-fil-A will enjoy record sales tomorrow.

Thats okay with me as long as the chain lives up to its website promise of treating every person with honor, dignity and respect regardless of their belief, race, creed, sexual orientation or gender."

I'm slated to have lunch tomorrow at a local pub.