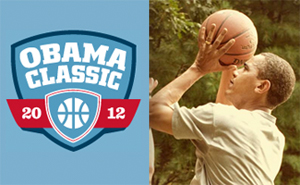 The Obama campaign, which has been raffling off dinners with celebs like George Clooney and Sarah Jessica Parker, has reached into the sports world with todays unveiling of the Obama Classic.

It features the chance to shoot some basketball hoops with the president and all-time greats like Michael Jordan, Patrick Ewing and Sheryl Swoopes; near-great Alonzo Mourning, and jury-is-still-out-on-whether-he-will-ever-be-greatunless he wins a championship with the Knicks--Carmelo Anthony. [The lucky winner should grill Melo on why he drove Jeremy Lin out of New York.] More players will be announced.

Marlon Marshall, deputy national field director for Obama for America, wrote in an email: Hit the court with Patrick Ewing and Melo? Trade stories with the president? This is the kind of stuff your kids will tell their kids, and no one will believe it until you show them a photo."

Non-hoopsters are encouraged to send in their three buck entry fee because they may have a kid or a friend who would love nothing more than to play with their heroes while you cheer them on from a courtside seat. A dinner follows the scrimmage.

Team Obama is getting killed by Mitt Romney on the fund-raising front. In July, for the third straight month, Romney and the Republican National Committee outraised the president by a $103.1M to $75M margin. Ninety-eight percent of Obamas contributions were under $250.

Events such as the Obama Classic though are PR gold for the president, promising rich returns in media coverage and endorsements from sports superstars.

One can be sure that Team Romney will respond to the Obama Classic challenge. What will the event be? A dressage show, polo match or yacht race are my top picks.