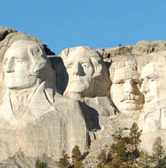 L&S of Sioux Falls was the nine-year incumbent before the states Department of Tourism broke the contract down into two parts. L&S handles creative and media buying on a $5M pact, while MMGY will guide PR, digital marketing, social media and web development efforts to promote the state to travelers on a $2.5M contract.

Each firm gets a three-year contract with two option years.

South Dakota, which has the benefit of leveraging attractions like Mount Rushmore and the Black Hills to tourists, kicked off the review in late March after the launch of a new advertising campaign, Your American Journey, which replaced its long-running Great Faces. Great Places slogan.

Ultimately, working with these agencies will be of great benefit to the department, the visitor industry and the state, said Jim Hagen, secretary of tourism.

MMGY, which has outposts in Kansas City, New York, Orlando and Denver, was created by the merger of Ypartnership and MMG Worldwide in December.

Twelve firms pitched for both parts or only one part of the RFP.