Returning to my desk this morning after a few days at the beach, I thought Id entered a time warp. And it wasnt just the 1950s décor of the ODwyer newsroom.

It was triggered by an item posted yesterday on odwyerpr.com, regarding the return of the Swift Boat gang. 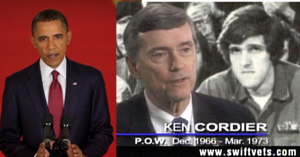 You remember the Swiftees, dont you? They were the guys who smeared Democratic presidential candidate and Vietnam War hero/dissenter John Kerry in his 2004 run against George W. Bush.

Swift Boat II also known as Special Operations OPSEC Education Fund, which predictably claims to be bipartisan, is rapping President Obama for taking out Osama bin Laden. The group is guided by PR firm HKMK, which is managed by Bush-Cheney hands Terry Holt and Trent Duffy. They are hardly a bipartisan couple.

The Fund claims the president took a victory lap too many for the killing of Americas most wanted terrorist. The Special Operations fund is following the political up is down and down is up playbook that says a candidates greatest strength is also his greatest vulnerability. Backed by an enabling right-wing media, the original Swiftees were able to cast a degree of doubt about Kerrys Swift Boat service record only because Honest John failed to take the outlandish charges seriously--until it was too late.

The Obama political team is too savvy to commit a Kerry-like blunder. The Massachusetts Senator and Obama surrogate already has attacked the Funds outrageous attacks made against President Obama While acknowledging the service of his fellow veterans, Kerry said a false attack is a false attackno matter whos making it.

President Obama gave the call to raid bin Ladens compound. His boldness deserves credit, not cheap scorn. Had the mission failed, Obama would have taken responsibility, just as Jimmy Carter did on April 25, 1980, for the aborted bid to rescue American hostages in Iran, an attempt that resulted in the loss of eight American servicemen.

Carter minced no words, saying: I ordered this rescue mission prepared in order to safeguard American lives and protect America's national interests, and to reduce the tensions in the world that have been caused among many nations as this crisis has continued.

He suffered the consequences in Novembers election against Ronald Reagan. Voters will soon decide if Obama gets points for the killing of bin Laden.