Since its founding in 1910, the National Urban League has been in the forefront of the fight for civil rights for black Americans. Its signature programs in the areas of jobs, healthcare, education and housing have improved the lives of millions of people. 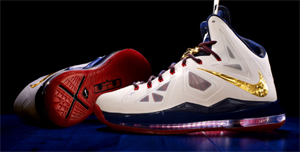 Simply, the NUL has made America a better place.

As the leader of the empowerment movement, its unsettling that NUL president/CEO Marc Morial, a former mayor of New Orleans, has gone after sneaker maker Nike for its still-not-yet-set-in-stone plan to introduce a pair of $315 basketball shoes.

The LeBron X Nike Plus, tricked out with electronic motion sensors to measure the height of a jump, got major coverage from the Wall Street Journal yesterday about the corporate audacity of testing the $300 price barrier.

Nike maintains a basic version of the LeBron James shoe will sell for about $180.

Following the WSJ report, Morial issued a statement to rip Nike for releasing such an outrageously overpriced product while the nation is struggling to overcome an unemployment crisis is insensitive at best. He implored parents not to spend scarce resources on an empty status symbol. He suggested that cash for the super Nike would be better spent on computers, books and school supplies. The Mayor is right, but its none of his business how parents spend their money.

Morial is over-the-top condescending. Nike is not a social welfare organization. Its in the business of making money. If Nike thinks it can turn a profit by selling exorbitantly priced shoes, more power to it.

The NUL shouldnt play the role of nanny, telling people where and where not to spend their money. Thats what empowerment is all about. Its about maturity and responsibility. Nike has taken a bunch of well-deserved hits about its sweatshop production over the years. Morials attack is a just silly. He has (or should have) better things to do.

Personally, Im a fan of the Converse Chuck Taylor All Stars shoe, which sells for under $50. Nike acquired Converse in 2003.

As for running shoes, I have always favored New Balance, which still makes 25 percent of its shoes in the U.S., over Nike.