Fenton is promoting the newly formed Artists Against Fracking, which kicks off Aug. 29 in New York behind support of celebrities like Yoko Ono, Sean Lennon, Lady Gaga and actor Mark Ruffalo. 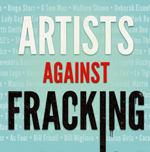 Lennon fired a salvo Aug. 28 with a New York Times op-ed criticizing the hydro-fracking process used to extract natural gas while describing the industrys plans to drill near his familys farm in New Yorks Catskills.

Few people are aware that Americas Natural Gas Alliance has spent $80 million in a publicity campaign that includes the services of Hill and Knowlton -- the public relations firm that through most of the 50s and 60s told America that tobacco had no verifiable links to cancer, Lennon wrote. Natural gas is clean, and cigarettes are healthy -- talk about disinformation.

Lennon argues that fracking is a threat to the upstate and New York City water supply.
Fenton says the new anti-fracking group will work to expose and stop the harmful and contaminating practice of fracking for natural gas and oil through mass awareness and peaceful democratic action.

Other members include Paul McCartney, Uma Thurman, Alec Baldwin and Salman Rushdie, among others.

Fenton, the progressive PR firm, is helping the group slate its first activist partnership project for Aug. 29 at noon at the Paley Center in New York.