Soon-to-be Republican presidential nominee Mitt Romney has taken a lot of hits during the long campaign. Many were fair. Many were cheap shots. 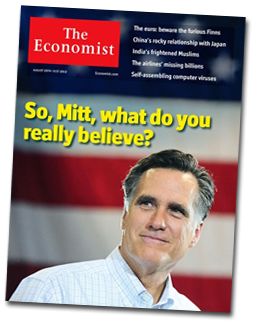 The Economist, however, dealt the cruelest blow to the former Bain Capital chief and Massachusetts Governor. And Im not referring to its depiction of Romney as a strange man, medalist in the flip-flop Olympics and potential "chameleon-in-chief" who is guided by a "peculiar mix of zealots and moderates."

Rather the lead editorial of the August 25 Economist says:

Competence is worthless without direction and, frankly, character. Would that Candidate Romney had indeed presented himself as a solid chief executive who got things done. Instead, he has appeared as a fawning PR man, apparently willing to do or say just about anything to get elected.

In dissing Romney, the snooty Brits take a gratuitous swipe at the noble profession of PR. It smears the memory of PR giants like Sam Adams, Eddie Bernays and the more than 300,000 Americans plying the craft today.

One hopes the nations august PR trade groups take the time to set The Economist straight on the important role that PR plays in todays society.

The magazine says America wont vote for a man who does not really know his own mind. It believes the Tampa convention offers Mr. Romney the best chance to say what he truly believes.

At the podium, Romney can make his case for the presidency, just as PR people make the case for their clients every day.