The scheduled 2012 in-person Assembly of the PR Society, as described in two teleconferences Aug. 29, has no bylaws to consider and most likely no contested elections to resolve and therefore no reason to be held.

Substituting a teleconference Assembly, as provided for in the 2009 bylaws re-write, would save many hundreds of dollars for the nearly 300 delegates. Hotel rooms at the San Francisco Marriott Marquis for Friday, Oct. 12 and the Assembly the next day are $249 each night plus 15.5% tax for a total of $575.69. 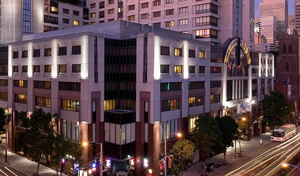 Delegates would have other expenses including meals. Total savings could approach $1,000. The conference itself does not start until Sunday afternoon allowing attendees to fly in Sunday morning.

The regular rate of the S.F. Marriott is $449 a night plus tax. The hotel said today that 149 rooms for Sunday in the PRS block remain unsold, as do 110 rooms in the Monday block.

Gerry Corbett, 2012 chair, told the teleconferences Aug. 29 that there are no bylaw changes to consider because the deadline for such proposals was that day.

Candidates for officer and board posts were announced July 31 and no one has come forward yet to oppose any of them. Cutoff date is Sept. 13 and the odds of any contests are very low. All candidates have refused to answer any questions put to them by reporters, members or non-members.

The 2012 Assembly, as described by Corbett, will consist of a morning session when leaders and staff will make speeches and an afternoon session in which the delegates will be asked to propose topics that will be discussed and then divide themselves into 15 or more groups that will go to various places in the hotel for discussions.

If delegates find their groups are not interesting they are free to go to any or all of the other groups. The prospect is of delegates wandering from room to room looking for a good discussion. As with last year, when the Assembly was similarly dis-assembled, all conversations and summaries that will be given are off-the-record.

PRS is out-of-step with other trade groups such as the International Assn. of Business Communicators, National Investor Relations Institute, American Bar Assn. and American Medical Assn. which hold their legislative sessions during their meetings and not on a separate day.

The PRS Assembly should be on a Monday afternoon.

Delegates may discuss many issues and make recommendations to the board but the board has repeatedly said that under no circumstances can delegates tell the board what to do. So delegates will spend Saturday afternoon spinning their wheels with no guarantee that any of their ideas will be accepted.


Finances Given Day of Assembly

Corbett told the teleconferences this week that delegates will not get the third quarter financial report until the day of the Assembly.

This will give them almost no time to study the report and prepare questions.

PRS did not post the first half financial report until Aug. 28, the day before the two teleconferences. http://tinyurl.com/953j597 Delegates, similarly, had no time to discuss the finances which revealed that while dues were raised 13% to $255, dues income rose only 7% to $2,907,285 meaning that only about half of the usual number of members are renewing. Society membership stands at just over 21,000 but this includes members who are two months past their renewal date.

The newsroom of PRS has a link to PRS Financials but reporters who click on that link are asked for their PRS membership numbers. Reporters are not allowed to join the Society although they can join the IABC and many other trade and professional groups.

This prevents PR reporters, unless they have sources in PRS, from properly covering the Society. Here are the links in the newsroom of PRS.