President Obama has been accused of bypassing the pesky White House press corps, using the Internet to appeal directly to the American people. The argument is not exactly a new one.

I received a copy of the Nov 29, 1923 New York Times as a gift from friends that my family hosted over the Labor Day weekend. The top story on the center of page one is headlined Coolidge to Talk by Radio on Harding Dec. 10; Message to Congress Also to be Broadcast. That was big news at that time. 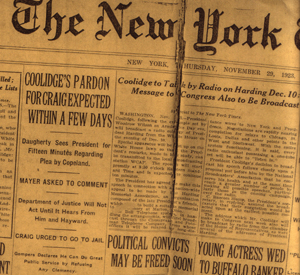 The piece was mainly about Silent Cals plan to deliver a radio eulogy for President Warren Harding from his White House study. He was to follow the example set by the ground-breaking radio address that President Woodrow Wilson made on Armistice Day eve.

According to the Times piece, special apparatus will be set up on the White House lawn so Coolidges remarks could be transmitted to local radio station WCAP. Bell Telephones Chesapeake and Potomac Telephone Co.s unit was to relay the 10-minute speech to long-distance wires to New York and Providence. Negotiations were in the works to transmit Coolidges words to Chicago, St. Louis, Dallas and other points in the west and southwest.

The Times giddily noted: With the entire system functioning, it is said, every radio enthusiast possessing a one-tube set will be able to listen in.

And heres the kicker: Coolidges decision to broadcast the fund-raising appeal for the Harding Memorial Assn. followed a proposal made by the National Broadcasters Assn. that he conserve his health and at the same time reach a greater number of people by making all possible speeches, particularly those in the coming campaign, over the radio, according to the Times.

Coolidge actually was a radio pioneer. His Aug. 23, 1923 inauguration --after the death of Harding-- was the first to be broadcast by radio and Cal make the first political speech via radio in February of 1924. He undoubtedly thanked the NBA for its recommendation. The 30th president passed the Radio Act of 1927, which put the medium under Federal Radio Commission.

Coolidge set the table for FDR, who mastered radio as a communications tool after he took office from Herbert Hoover in 1932.

The rest is history.