How about that Bill Clinton? 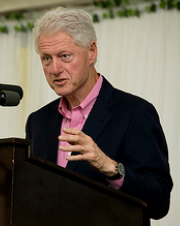 As Clinton addresses the Charlotte convention tonight, his positive rating tops his previous 66 percent high score that he enjoyed before his pre-inaugural score in 1993.

The pollsters blame the GOPs lackluster Tampa convention TV ratings to the absence of speakers that Americans would like to hear.

My reason: the mean-spirited diatribe launched by self-absorbed Jersey Governor Chris Christie, who uttered the I word many more times than the name Romney.

Christies super-heated blast stood in sharp contrast to the uplifting words from his Garden State political rival Corey Booker at the Democratic confab. The Newark mayor talked of the need for shared-sacrifice. And when your country is in a costly war, with our soldiers sacrificing abroad and our nation facing a debt crisis at home, being asked to pay your fair share isn't class warfareit's patriotism, said Booker. The stage is set for a Booker run against the big fella.

Clinton will raise the rafters tonight. Obama will do the same with his formal acceptance speech tomorrow.

All will be for naught, however, if Democrats fail to heed the advice of Massachusetts Governor Deval Patrick, who said: If we want to earn the privilege to lead, its time for Democrats to grow a backbone and stand up for what we believe.