President Obama burst upon the national stage during his prime-time speech at the National Democratic Convention in Boston in 2004. After former president Bill Clintons masterpiece last night, Obama faces pressure to best his Boston performance. 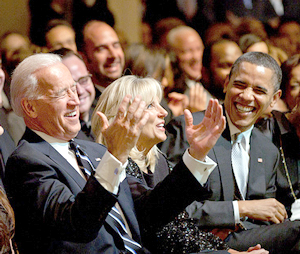 The president does have one ace in his hand: Vice President Joe Biden. The pride of Scranton is known for dishing out a gaffe or two once in awhile. He talks right before the president. Comic relief?

Will Biden make the case for the president's re-election or set the groundwork for his own run in 2016? Beau Biden, Delawares attorney general and Joes son, said his dad is only focused on the race at hand. That should be taken with a grain of salt.

Joe has been a political player for 40 years. Its not likely that he's just going to fade away. Think of the epic fight between Joe and Hillary Clinton for the Democratic nod in 2016.

Following Bill Clintons address, CNNs Republican strategist Alex Castellanos said: This convention is done. This will be the moment that probably re-elected Barack Obama. Obviously, that statement is a tad premature.

Obama could lock-up the election with a campaign promise that Bill Clinton would play a prominent role in his second administration. Would Bill take the Secretary of State job to succeed his wife? A less taxing U.S. Ambassador to the United Nations is more likely. There has been talk about Bill becoming the first American Secretary General of the United Nations. A very visible Bill would be a giant plus for Hillarys presidential run. It also would be payback.

Think about it. Bill and Hillary Clinton -- ruling the world as leaders of the U.N. and U.S. -- would be the ultimate power couple.