After yesterdays Meet the Press performance, Im a little worried that Mitt Romney is returning to flip-flopper mode. Romney now appears to be junking the bedrock proposal of his campaign, which is killing ObamaCare -- though its based on RomneyCare of Massachusetts. 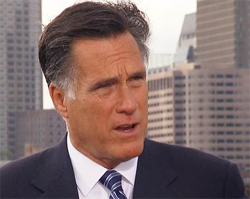 Mitt told David Gregory that he would keep selected parts of ObamaCare in place, which is bound to infuriate conservative voters and Republicans in Congress. He also hinted that hes willing to raising taxes on the super-wealthy by eliminating unnamed loopholes. Thats more sacrilege.

Geez, is Mitt running scared? Or has the etch-a-sketch finally made its way into Romney headquarters.

A different take: Romney is being honest with the American people. The GOP pitch about lowering taxes on job creators to revive the economy is a canard. Businessman Romney knows it.

Walter Cadette, retired economist at JPMorgan, says the notion that rich people hire workers based on tax rates is silly.

In a Sept. 5 opinion piece posted on Thestreet.com, Cadette noted that hiring is based on expectations of pre-tax profits. He wrote:

Perhaps, Mitt has seen the light. Romney is said to be a moderate at heart. He should drop spouting GOP lines and be true to himself.

Al Gore is an unlikely inspiration. Gores wooden presidential campaign run caught fire only after he decided to go rogue. The vice president pulled off a presidential win in 2000, but was denied a rightful victory from the combination of GOP shenanigans in Florida and his own cave-in.

A word of advice: keep talking to people like Gregory, rather than to GOP echo chamber Fox News.