The Republicans, not Mitt Romney, deserve the blame for blowing the opportunity to defeat President Obama, who doesnt exactly remind anybody of FDR. Instead of promoting the candidacy of a rising GOP star, Republicans turned to a known quantity, who inspires nobody. At some point in the GOP primary slog, Romney trailed nearly every opponent. 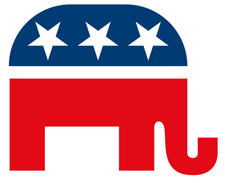 Former Utah governor Jon Huntsman was the one candidate who could have given Obama a run for the money. But he was rejected by the GOP base for serving as Obamas ambassador to China. In the real world, national serviceespecially in a vital post like Beijing, is regarded as an asset, not deficit.

Now the GOP is left with Reeling Romney, a flawed candidate who bolsters the Democratic chance of retaining the Senate and winning the House. Romney is entitled to a gaffe or two, but his strategy of doubling-down on bonehead statements makes him look far out-of-touch with the rest of America.

Saying that 47 percent of Americans pay no income tax and fail to take personal responsibility and care for their lives is more than an inelegant statement -- as Mitt said in his defense of his pitch at the Boca Raton fund-raiser. Its an insult to hard-working families across the U.S.

According to the Center on Budget and Policy Priorities, 61 percent of households that paid no income tax in 2011 paid a payroll tax. They didnt earn enough money to owe federal income taxes, largely due to the Earned Income Credit passed during the Ford administration and expanded during the Reagan and Bush 11 White Houses.

The other group of Romney deadbeats include the elderly (22 percent of households paid no fed tax) and students/disabled/employed (17 percent). Adding to his self-inflicted wound, Mitt said of the 47 percent, My job is not to worry about those people.

Romneys war on moochers follows last weeks knee-jerk response to the attack on the Cairo embassy, in which he accused the Obama White House for siding with those that killed the U.S. ambassador and three aides. Enough said about that one.

The Washington Post today editorialized that Romneys vision for the country is a fantasy." It also took Romneys running mate, Rep. Paul Ryan to task for telling the GOP convention that Obama offers Americans a dull, adventureless journey from one entitlement to the next, a government-planned life, a country where everything is free but us. Ryan frets that the safety net may get turned into a hammock.

Obama is a very lucky guy to have Romney as an opponent. Bill Kristol, editor of conservative Weekly Standard, blasted Romneys 47 percent remark as arrogant and stupid. He wants Mitt to step down, replaced by a combination of Ryan and Florida Senator Marco Rubio.