Saturday is the 30th anniversary of the murder of seven Chicago-area people by poisoned Tylenol capsules. The victims all took the capsules on Wednesday, Sept. 29, 1982 and were dead soon after.

Doctors were able to restart the hearts of new mother Lynn Reiner, Mary McFarland and Theresa Janus who were briefly put on life support. But they had no brain activity and were clinically dead within minutes of swallowing the pills. Reiner, just home after giving birth, took two Tylenols in her living room and keeled over seconds later as her horrified daughter, Michelle, watched.

Paula Prince took one cyanide-laced capsule about 10 p.m. Sept. 29 but her body was not found until two days later.

An independent, non-profit group, www.retroreport.com, is working on a documentary about the murders. 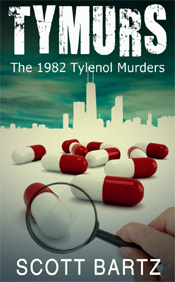 Bartz, who authored "The Tylenol Mafia" in 2010, has started publishing a series of three smaller books on the subject, the first one being "TYMURS: The 1982 Tylenol Murders."


Sharp is the author of "Blood Feud: The Man Who Blew the Whistle on One of the Deadliest Prescription Drugs Ever," published in 2011 by Dutton and which tells how two salesmen exposed the dangers of the J&J blood drug Epoetin alfa.

Those who died in 1982 from poisoned Tylenols were unwilling victims but the same cannot be said of the media and others who know better now that Bartz has laid out in extensive detail how the acetaminophen in Tylenols passed through up to five sets of hands on the way to store shelves.

J&J, patting itself on the back at how great its media relations was, although it didnt hold a press conference, must have been amazed at how the police, FBI, media and the courts went down like bowling pins before an onslaught of spin.

Supposedly it cleared the nations shelves of Tylenol products (an order given about five days after discovery of the murders) but in truth the stores themselves had removed all Tylenol products just about one day after murders.

No media ever got a chance to question J&J in the open about the distribution channels. A fake story of a madman running from store to store was repeated endlessly.

Seven people buying and then ingesting poisoned capsules on the same day suggested the presence of hundreds of poisoned bottles in suburban Chicago stores. Most stores only sold about one bottle a week of Extra Strength Tylenols. The odds are astronomically low that there were only a few poisoned bottles.

The wide distribution pointed to the culprit being in J&Js distribution process but no story in 1982 touched that subject. J&J officials were in seclusion, picking off reporters one by one in private interviews and bragging about how cooperative they were.

The madman-running-around-the-stores theory is knocked for a loop by the death of Reiner, who got her Tylenols free from a secure hospital dispensary as part of a new mother kit.

J&J did have a press conference six weeks later when it re-introduced the easily-spiked Tylenol capsules in tamper-resistant containers. No police dept. would buy bullet-resistant vests nor would people buy canned foods that were botulism-resistant.

After Diane Elsroth, 23, of Peekskill, N.Y., died of poisoned Tylenols in 1986, J&J finally decided to stop selling Tylenol in capsules.


Evidence Turned Over to Suspect

The Tylenol murders has got to be the only crime where almost all of the evidence was immediately destroyed, at the behest of police, and much of the remainder turned over to suspect J&J, whose distribution practices should have been under examination.

Police went from street to street with bullhorns urging people to flush their Tylenols down the toilet or throw them away. All sorts of evidence such as fingerprints and DNA was lost in this manner. J&J collected bottles remaining on store shelves.

J&J, pretending it had nothing to do with the murders, offered a paltry $100,000 reward when it should have been $10 million or more. That might have smoked out some leads. Police at the beginning wasted valuable time trying to pin something on one of the families. Hit with a barrage of grilling and negative coverage, the families have never recovered and remain press-shy.

It took eight years of wrangling in court to win a settlement out of J&J which family members say is far from munificent.

The New York Times, which has yet to print a word about the Bartz book, carried an article on May 3, 2010 by Natasha Singer saying that J&J is considered a model for the consumer products industry for its fast and adept handling of a Tylenol scare in 1982 when seven people in Chicago died after taking capsules that had been laced with cyanide.

On Aug. 23 of that year a front-page NYT biz section feature by Peter Goodman hailed J&Js handling of the Tylenol murders as Exhibit A in the lesson book on forthright crisis management.

Fortune magazine, which on May 28, 2007 hailed J&J/Tylenol as the gold standard in crisis control, was sent a column via a general Fortune mailbox. The writer was Jia Lynn Yant but there is no way of contacting an individual Fortune reporter via e-mail or phone.

A major culprit in perpetuating the Tylenol myths is the PR Society, which gave J&J a special Silver Anvil in 1983 after its Tylenol campaign lost in the crisis category to Hygrade Hotdogs. Hygrade had a product tampering problem and won back public favor via a PR campaign by PR Associates, Detroit. Hygrade gave the budget for the campaign to the judges which J&J refused to do for Tylenol.

A full-page feature in the March 2008 Tactics of PRS said J&Js handling of the Tylenol deaths has become an enduring example of crisis management done right.

The article is not available on the PRS website or elsewhere. The Silver Anvil entry is available to members free and non-members for $7.99. However, member access codes are needed to make the purchase. J&J is praised for its extraordinary response to the murders.

Wikipedia says J&Js quick response in 1982 has become the gold standard for corporate crisis management. The WP entry, after a year of efforts by Bartz, now notes that his book puts the blame on flaws in the distribution system of J&J.

The Economist, which said April 10, 2010 that J&J/Tylenol is the "gold standard of crisis management," refused to change that phrase after we gave it evidence that challenged it. The remark was in a column called Schumpeter written by Adrian Woolridge.

Business editor Edward McBride said that In the context of Toyotas recent failings, or Tiger Woods infidelities, or any of the other episodes referred to in the article, J&Js decision to recall Tylenol was very prompt -- although the firm may well have made subsequent mistakes.

The Christian Science Monitor, which said Jan. 15, 2011 that what J&J did in 1982 is still regarded as a shining example of corporate social responsibility, promised that it would look at the matter more closely.

The Motley Fool (fool.com), which on May 6, 2010 said that J&J has always been the poster child for how to handle a crisis, was sent one of our columns debunking the Tylenol myths.

James Lukaszewski, crisis expert for PRS, said in an e-mail that The 1982 Tylenol incident remains the most internationally recognized successful crisis incident response, even after all these years.


U of F Flunks Us

The University of Florida College of Journalism and Communications was contacted because a posting on its website called Effective Crisis Management says J&J conducted an immediate product recall, knew they were not responsible for tampering of the product, and put public safety first.

We asked College Dean John Wright, Ph.D., to correct these false or at least debatable statements.

Replying was David Carlson, executive director, Center for Media Innovation and Research at the College, who said we offered nothing but opinion. He said the piece was by a student who quoted the Chicago Sun-Times, J&J, and Mark Mitchell of Economic Assn. Intl, and the piece will be changed when those organizations change their opinions.