The million-dollar question before tonights big debate is whether Mitt Romney will take up Sarah Palins suggestion to go rogue. 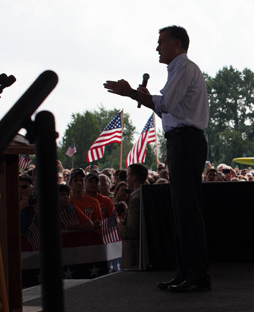 The former vice presidential candidate believes mild-mannered Mitt has to come out swinging to deliver a punch to President Obama's no drama demeanor in an effort to revitalize his sagging campaign.

While I somewhat agree with the half-term Alaskan governor, a new survey by Interpublics Powell Tate and KRC illustrates the risk of rogueness.

Fifty-seven percent of the respondents say any incivility shown later at the University of Denver will affect their votes. That sentiment is shared pretty equally by Independents (58 percent), Republicans (55 percent) and Democrats (54 percent).

A majority of those surveyed, 55 percent, credit President Obama with winning the civility game, while 49 percent of respondents say the ex-Massachusetts governors tone as uncivil.

Vice President Joe Biden is rated as civil by a margin of 49 percent to 43 percent. People dont have a fix on Congressman Paul Ryan. An equal number of respondents, 46 percent, rate Ryan civil and uncivil.

KRCs takeaway is that Romney must stress policy differences with Obama without making strident attacks.

As for Sarahs advice, rogue is her style. It would be a complete personality change for the Mitt. A rogue Mittster would reinforce his image as a coreless flip-flopper.

BTW, the PT/KRC poll, which was conducted between Sept. 14 and 16, has Obama beating Romney by a 48 percent to 43 percent margin.