Fresh from his middle-class has been buried for the past four years gaffe, Vice President Joe Biden gets the chance during his showdown with Paul Ryan on Oct 11 in the Bluegrass State to regain Democratic momentum to hold the White House. 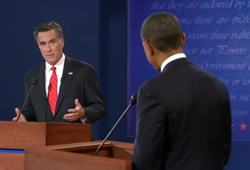 Where was president Obama last night?

His body-double turned in a lousy debate performance against Mitt Romney. The faux presidents head seemed to shrink as the night went on when stacked up against Romneys noggin in the side-by-side screenshots, giving the viewer an impression of President Pinhead.

Obama may have dispatched the body replacement to the University of Colorado because he doesnt really want another four years in Washington. After all, the guy took office during the worst economy since the Great Depression, saved General Motors and Chrysler and many auto suppliers from shutdown, passed the greatest piece of social legislation since Medicare, rescued the financial system, and ended two wars while under a withering assault from Americas billionaire boys club and its Republican party. Whats next?

With Malia and Sasha growing up, the president may find a job as college president or think tank head very, very enticing. Undoubtedly, Michelle would like to return to the Windy City to resume her legal career.

Word of advice for Team Obama: truck in some family members for the Oct. 16 rematch at Hofstra University (Malia, Sasha and grandma Marian Robinson get a pass because Oct. 16 is a school night.) Last night, Michelle and make-believe Barry were overwhelmed by the Romney clan during the post-debate round of handshakes. They looked lost in the sea of grinning Romneys, only adding to the Dems' misery.

The former Massachusetts Governor also had to dodge potshots from the sidelines from bombastic Donald Trump and reality TV star Sarah Palin. Obamas stand-in was a more than worthy opponent for a sharp guy like Romney. Romney grew more confident as the debate progressed as chopped his nameless opponent up.

If the president really wants to stick around in D.C., he has to show up for the next meeting with Mitt.