Think of your sons, Mitt.

I like PBS. I love Big Bird. But Im not going to keep on spending money on things to borrow money from China to pay for it, was Mitt Romneys only gaffe during last weeks debate -- though the Republican candidate played fast and loose with the truth. 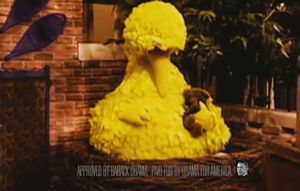 The Big Bird reference was a gift to the stumbling and fumbling president, whose campaign today was rebuked by Sesame Workshop for using the worlds most famous bird in a Romney attack ad.

Sesame Workshop is a nonpartisan, nonprofit organization and we do not endorse candidates or participate in political campaigns. We have approved no campaign and as is our general practice, have requested that the ad be taken down," said the organization in a statement.

Since its debut in 1992, only two candidates stiffed the Nickelodeon program. Loser and Romneys fellow Massachusetts patrician John Kerry was the first candidate to say no to Nick. It's not clear whether wind-surfing, Teresa, Nickelodeon or the Swift Boaters sunk Kerry's campaign. His decision to snub Nick led George W. Bush to do likewise.

Romney will survive his anti-kid campaign. Hes 65 and Big Bird and Nickelodeon fans are too young to vote. What about Romneys sons? Ben, Tag, Josh, Matt and Craig may harbor their own political aspirations. Theyll need the support of todays future voters. And what about Mitts grandkids? At last count, Mitt and Ann Romney had 18 grandchildren. I bet a lot of them would like to see grandpa on Nickelodeon.

Is now the time for front-runner Romney to play it safe? Viewers of the Nick program have a great track record in picking the presidential winner. Their only loser was Al Gore. To be fair to those Nick voters who picked Gore, an asterisk should be placed next to their tally.

Mitt should be nice to Nick.