The price and value of a diploma is a white hot topic these days as college-related debt saddles students and parents.

Marketing the value of a college degree should be a top priority for university administrators as tuition, board and fees at top-tiered schools hover around the $60K mark. 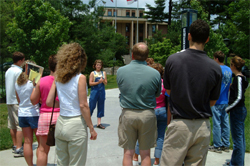 As a veteran of the college tour scene -- with 17-year-old daughter and wife -- heres a friendly word of PR advice for the heads of college admission office heads: select enthusiastic and knowledgeable student tour guides to shepherd parents and students around campus. They make a very strong impact.

We were underwhelmed by some tours of California and East Coast schools during the past two years. Many guides viewed their job as a dreary work-study requirement, rather than being an ambassador of their school. They turned off many potential clients.

Though I'm a big fan of San Francisco, it was hard to steer our leader at USF from her weekend plans, dieting strategy or the then-impending dragon boat race.

Our Georgetown University guide led us to the terrace of the senior dorm overlooking the Potomac River. Though the views of the river and federal D.C. were outstanding, the terrace was strewn with beer cans and bottles. In an attempted comeback, our guide noted that many seniors were over the legal drinking age. That didnt wash with most of the parents, who left pricey Georgetown with the view of party central.

Of course, there were outstanding guides. Guides at Boston College, SUNY Stony Brook and William and Mary, who had to deal with a grumpy crew struggling with the 103 degree temperature, were great. Our tour wrapped up this weekend with high marks for guides at Amherst College (Massachusetts) and Bowdoin College (Maine).

The only slip at Bowdoin: our guide told of famous graduates such as Nathaniel Hawthorne and Henry Wadsworth Longfellow, but after saying the school graduated a U.S. president, she couldnt remember who he was.

A Google search found that Franklin Pierce, the pride of New Hampshire, graduated from Bowdoin. Since the 14th president, whose support of the Kansas-Nebraska Act set the stage for the Civil War, ranks among the worst commander-in-chiefs, perhaps she did the right thing by not naming him.

Colleges should reward (e.g., pay) top guides. That would be a tiny outlay that would offer a big return on investment.