Citigroup CEO Vikram Pandit, who shocked and pleased Wall Street today with his resignation, has a lot in common with President Barack Obama. Both steadied their financial ships, yet got so little credit for doing so. 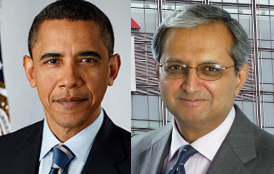 In 2007, Vik took the Citi mess off the hands of Chuck Prince, the hand-picked successor of Sandy Weill--architect of the too-big-to-fail Citi--who now has second thoughts about the Frankenstein that he created.

Pandit slashed payroll and had the tenacity to express a debt of gratitude to U.S. taxpayers for the $325B federal bailouta Wall Street heresy. Symbolically, man of the people Pandit took a $1 salary, though he did do pretty well by selling his Old Lane hedge fund to Citi in 2006 for a cool $165M. Vic has Chuck to thank for Citis largesse.

Viks legacy is being remembered for the 85 percent decline in Citis stock price during his tenure. A more fitting legacy: Citi is still around.

Similarly, Obama took office and immediately faced the mess created by his predecessor. He led the country through the Great Recession and global financial crisis while ending one unjustified war and winding down another. Obama saved two car companies and passed a healthcare law that will insure tens of millions of uninsured Americans to boot. That's Mount Rushmore stuff.

Yet the President is neck-in-neck in polls with an untested competitor, who is best known for saying anything to please his audience. Go figure.

Americans will vote Nov. 6 on whether Obama gets the credit that he so richly deserves.