The father and son team of Brian and Trace Cohen have founded launch.it, a free self-publishing platform that allows users to write their own news for new products/services to be publicized and shared.

Our vision is that new products and services should be easy to find and share, said Trace Cohen. Entrepreneurs and big brands alike will no longer be challenged to present themselves honestly and fully to deserving customers, he added. The slogan of the site is If its new, its here first.

Products posted on the site will be subjected to reviews by users.

You can call this tough love or detox for over-hyping marketing executives, but the emphasis is on getting the truth well told, said Brian Cohen, who founded Technology Solutions, Inc., in 1983 and sold it to the McCann Erickson World Group in 1997, becoming its vice chairman.

He founded computer publications including Computer Systems News and InformationWeek magazine and chairs the New York Angels investment group that has put $45 million into start-up companies.

Product launchers write their own stories but readers have the ultimate power to make or break your new product, says Brian Cohen.

He adds: Launch.it will create better marketers based on their willingness to listen to their customer base and change their habits. We are filling a void since there was no single destination site for all news of the new. 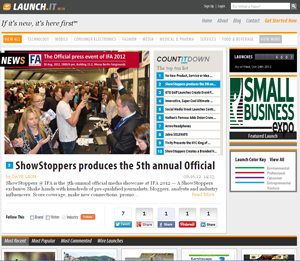 An Action Box on launch.it lets readers comment. Users can also buy the products written about via a "buy" button next to the editorial content. Not only will visibility be obtained, but possibly financing for worthwhile ideas, said Cohen.

The site will be community-curated by multiple horizontals and verticals so that the most popular news will rise to the top, he said.

A social network lets users follow their favorite product launchers and companies. Partnerships for syndication to leading publications are available.

Once a news release is posted, the issuers can access a wide range of analytics such as page views, comments, demographics, infographics and psychographics.

Launch.it has already obtained key placements for itself, including features in Business Insider and the New York Times.

PR people who sign up can post their news in less than ten minutes, said Trace Cohen. He added: No new product, service or idea will ever get left behind.