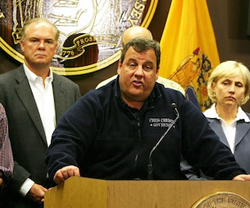 Killer hurricanes like Sandy are no time for politics. Both presidential candiates wisely suspending their campaigns as the storm loomed.

As Hurricane Sandy moved up the east coast, President Obama went into full commander-in-chief mode conferring with local officals about
disaster relief efforts. That's what a president does.

Opponent Mitt--fretting that the election is a mere week away--damaged his standing by rolling out a series of "storm-related events." How desperate, if not downright cheesy and un-presidential.

Any perceived momentum for Romney has vanished just like the most powerful winds of Sandy.

The media have rightly taken Romney to task for his plan to dismantle the Federal Emergency Management Agency and turn over relief
efforts to the states or even better (in his view) the private sector.

Words have consequences. Romney has a knack of running from past positions, but the vast multi-state devastation of Sandy shows the absolute need for a single coordinated federal disaster effort. Had Mitt been in the White House with a Republican Congress at his call for the last four years, God-help current New York/New Jersey clean-up efforts.

Jersey's Republican Governor Chris Christie, who has been campaigning for Romney, is the political star of the early relief effort. He shunned the standard GOP line of criticizing or belittling Obama at any opportunity. Christie told NBC that the president and FEMA did a great job in expediting relief to the Garden State. He told Fox News that Obama was "outstanding" in getting help to the stricken Garden State.

"He's been very attentive, and anything that I've asked for, he's gotten to me. So, I thank the president publicly for that. He's done, as far as I'm concerned, a great job for New Jersey," said Christie.

Fox News' Steve Doocy told Christie that he'd heard that Romney may do some storm-related events in New Jersey. Christie hit it out of the
park, saying he's not interested in being a campaign prop. "I've got 2.4 million people out of power, I've got devastation on the shore, I've got floods in the northern part of my state. If you think right now I give a damn about presidential politics then you don't know me."

That's what leaders do.

Regarding Hurricane Sandy, Christie rose to the occasion, while Romney's cheap political pandering has hurt his candidacy.

The Jersey Governor is the heavyweight GOP contender for 2016.