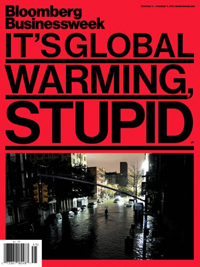 The magazine concedes it's not very sophisticated to single out a weather event to support global warming. But c'mon. Take a look at lower Manhattan and the devastation of New Jersey. Are we to simply accept our current intensifed weather as the new normal? That's putting our heads in the sand.

NYC is not constructed to withstand the wrath of hurricanes like Sandy. Why? Storms of that magnitude simply didn't happen before. We have to step up our game.

America needs strong political leadership to deal with the climate change issue. Global warming shouldn't be a partisan issue. It's an American issue.

There's hope from politicos like New York Governor Andrew Cuomo. He told President Obama that "we have a 100-year flood every two years now. That is not a political statement. That is a factual statement."

To climate change deniers, Cuomo said they are running from reality. Sandy came as upstate New York was still recovering from Hurricane Irene.

New York Mayor Mike Bloomberg was less forceful than his magazine, saying he isn't sure whether it's climate change or not, but America has to deal with the issue of severe weather.

It will cost billions to re-engineer NYC and other parts of the country with levees and massive sea gates to keep the rising tide from drowning more Americans.

That's a good investment compared to the untold billions in property damage, loss of economic activity and deaths due to the howling wind and surging water of this week.

Hurricane Sandy's gift to America may be a focus on global warming, rather than on crackpot deniers who get lots of coverage in the media
as they struggle to report a "balance" on warming. The debate is over.