Tough Loss Leaves GOP at a Crossroads reads a headline on the front page of today's Wall Street Journal in a piece about the Republican partys loss of a golden opportunity to take control of the Senate. 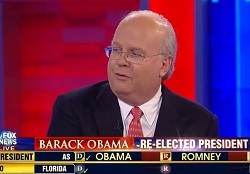 That line is a less-than-subtle swipe at WSJ ace pundit Karl Rove, whose American Crossroads kicked in more than $100M to defeat President Obama and the Democrats. It was cash spent for naught.

Roves weekly anti-Obama screeds in the WSJ leading up to the election leads one to believe that Bushs Boy Genius lost a few miles-per-hour on his statistical analysis fastball. In a September column, Rove penned a piece predicting that low turnout among Hispanics, millennials and women would hurt the president. They remained key cogs in the coalition that put Obama on top.

In his Halloween piece, Rove wrote: It comes down to numbers. And in the final days of this presidential race, from polling data to early voting, they favor Mitt Romney. Karls conclusion: Sometime after the cock crows on the morning of Nov. 7, Mitt Romney will be declared America's 45th president. Let's call it 51%-48%, with Mr. Romney carrying at least 279 Electoral College votes, probably more.

Instead of listening to the cock crowing, Rove was eating crow this morning.

But Rove wasnt the only WSJ pundit who was way off base. On Election Day, Kimberley Strassel called the race for Romney. She wrote: My final prediction is that at a minimum, Mr. Romney wins 289 electoral votes, a tally that includes Florida, Virginia, Ohio, Colorado, New Hampshire, North Carolina and Wisconsin. If it is a big night, he also picks up Pennsylvania and maybe Minnesota.

Mitt did squeak out a win in North Carolina.