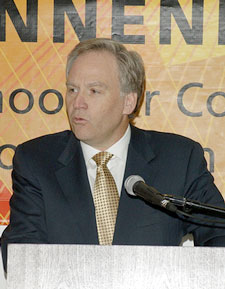 Hes in a strong position to one day lead one of the worlds biggest ad/PR conglomerates. That would be quite a coup for PR, a validation of its leading role in the communications space.

Diamond told me more than once that cost-effective PR -- not advertising -- should power corporate communications programs during these social media-driven times. He told Ad Age that PR should be the brand stewards rather than brand tactical executioners. Well see how that philosophy plays out with the ad people of McCann.

The 59-year-old Diamond takes over for Brit Nick Brien, who was the second highest paid executive at IPG during the past year. His base salary was $1.2M, compared to Roths $1.4M. Roth did trump Brien in the total compensation column by a $13M to $4.8M margin.

Interpublic completed the True North acquisition in 2001 and Diamond, Leslie and Andy Polansky built Weber Shandwick into one of worlds largest PR firms. Harris has had a heckuva career.

Roth, 66, has helmed IPG since 2005. The former Mony Group CEO has done a good job in getting IPGs financial house in order. In announcing Diamonds appointment at McCann, Roth lauded his understanding of the business needs of global CEOs, across a range of industries. That expertise is key in todays linked society.

He may soon run the entire show.