The mainstream media rewarded President Obama their most favorable coverage during the last week of the election, according to a survey released by the Pew Research Centers Project for Excellence in Journalism.

Thirty-seven percent of the stories were positive, while 16 percent were unfavorable. The coverage tone focused largely on the Presidents slim, though consistent, lead over Mitt Romney in the polls. 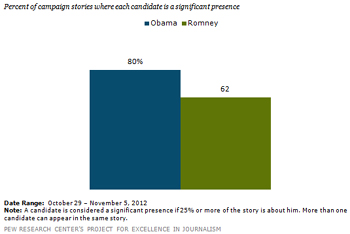 Pew found that the leadership that Obama exhibited in the aftermath of Hurricane Sandy did not carry over much to campaign coverage. Only four percent of election coverage was Sandy-related. The Presidents treatment was mostly neutral or mixed, according to Pew. Obama though at least did get a mention. Sandy may have hurt Romney as the former Massachusetts Governor was a bystander in Sandy relief due to his lack of political office. [Mitt was ridiculed for turning a fund-raiser into a hurricane-relief event ].

The Comcast/General Electric unit even outdid Rupert Murdochs Fox News in outright partisanship. Foxs attacks on the President rose from 47 percent to 56 percent. The Fox gang, however, couldnt whip up much fervor for Moderate Mitt. His positives rose from 34 percent to 42 percent on Fox, which had signed up most of Romneys primary challengers as contributors.

On the social media front, Pew found that Romney had his best run on Twitter during the final week. Obama took the blogosphere, while the number of Facebook conversations about Obama were steady, talk of Mitt declined.

It was a social media nail biter, just like the election.