No better illustration of the rampant politics that tramples on member finances and values are the choices of Philadelphia for the 2013 conference of the PR Society and Marriott as the host hotel.

PRS has set a new record by returning to the same conference city in six years and is using Marriott as the host hotel for the third year in a row.

Marriott guards went whole hog in blocking this reporter from everything at the 2011 conference in Orlando and they outdid themselves at the 2012 conference in San Francisco by booting us out of the hotel entirely and telling us not to come back.

This thuggish and actually illegal behavior no doubt sealed Marriott as the hotel of choice for future PRS conferences. 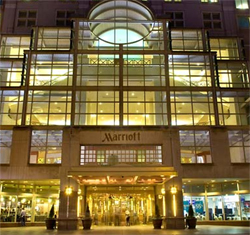 Security at the Marriott S.F. initially told us we had the right to stand behind a certain line in a corridor since PRS had rented the corridors to exhibitors. That seemed o.k. to us.

However, several incoming members said hello and talked to us and word of this got back to PRS staff/leaders. Guards then ordered us to go up two escalators to the hotel lobby and wait there.

Marriott security there told us we could talk to anyone we wanted to and give out papers as long as we bought a coffee at the Starbucks in the lobby and were in Starbucks territory.

However, more guards soon arrived and countermanded these instructions, saying we were not to talk to anyone nor give anything to anyone including our business cards.


Marriott: Go and Dont Come Back

After talking to a reporter friend of ours, a security person came up to us, closely and menacingly, and demanded we leave the hotel forthwith, saying we had better obey this. Security said we had broken rules against talking and giving something to someone. We were just about forcibly escorted from the hotel and told not to come back, the guard walking closely and step-by-step to the doorway.

This goon-like behavior was no doubt relayed back to PRS staff/leaders and made them jump for joy.

Ironic is that the VP-PR of Marriott is none other than longtime Washington, D.C. reporter Kathleen Matthews who is married to Chris Tell me something I dont know Matthews of MSNBC. Both have been informed several times of Marriotts lusty enforcement of PRSs anti-public, un-American and illegal blockage of press coverage. They remain silent on this subject.

Ellen Gonda, VP-PR of Hilton, whose Washington Hilton hotel was the scene of the 2010 conference, had called up PRS staffers to protest discrimination against ODwyer reporters but said her pleas fell on deaf ears.

PRSs blocking of Assembly coverage by any reporters means the Society has forfeited the right to use of the word public in its name since reporters are also part of the public.

About the only word accurate in the groups name is Society since it is not public, its relations with the outside world are spotty and/or hostile, and its anti-democratic, anti-press, information-withholding behavior proves it is the antithesis of what America stands for.

Holding a conference in the same city only six years later is an obvious award to a chapter whose leaders have been super-loyal to national and particularly the APR program of its all-APR leaders.

The five-person Philadelphia and four-person Puget Sound Assembly delegations led the fight in 2004 against allowing non-APRs into the Assembly. The motion only passed by five votes.

Philadelphia proposed that half of each Assembly delegation be APR while Puget Sound would only allow one non-APR delegate every three years. Critics noted that more than 30 chapters only have one delegate and was this delegate supposed to be chopped in half?

A member of the Philadelphia delegation was Carole Gorney, retired professor emeritus of Lehigh University and a Fellow of PRS. All five delegates voted against letting non-APRs into the Assembly according to the roll call vote, the only one ever taken using the electronic devices that were introduced with the 1999 Assembly.

The 2012 Assembly, which considered no bylaw changes and which was busted into numerous chat groups for three hours (about which there has been no report), was a gigantic waste of the money and time of the nearly 270 delegates. Most useless Assembly ever, said a group of senior members in a memo to us.

Delegates were forced to spend two extra nights in a hotel unless they got to the meeting early that Saturday morning via a red-eye flight.

The tragedy is that the same thing will be repeated Oct. 25, 2013, the Friday before the start of the conference, instead of putting the meeting within the conference such as Monday afternoon.

The 2012 Assembly proved to any doubters that leaders/staff would just as soon as do away with the meeting. The Intl PR Assn. has done just that by eliminating its 60-person governing Council despite protests and resignations of leaders. http://tinyurl.com/cmzezsm

An audit of the reported attendees at the 2012 PRS conference is something that needs to be done.

The attendance list shows that more than 20 ex-presidents and chairs were present but former such leaders say no more than eight or nine ever attend the special dinner for them on Monday night. Also in the attendance list are the names of 26 staffers and we wonder how many of them actually were at the conference. How many other fake names are on that list?

On another front, we continue to work with Wikipedia editors in an effort to get a more accurate history of PRS. The editors have made at least a half dozen corrections we have sent them but still insist there is writing on the APR exam although a co-chair of the UAB has told them there is no writing.

The WP entry says that the Assembly governs the Society when the Assembly has been told numerous times by the board that policy-setting is in the hands of the board.

Major events in the Societys history are left out such as the 1989 split with its 501/c/3 educational arm the PRS Foundation. That body left to form the Institute for PR, ridding itself of the demand that all board members be APR. Such a rule crimped fund-raising because few PR executives are APR.

There is no mention of PRSs decision in 1995 to close the exhibit hall for four years after more than 40 exhibitors organized the PR Service Council to lobby for better treatment at conferences.

Missing is the censure of Washington, D.C. counselor Summer Harrison in 1988 after she called for PRS to criticize four PR leaders for giving CIA head Bill Casey advice on how to raise funds for the Contras of Nicaragua. Two former PRS officers were among the four, Kal Druck and Kenneth Clark. Harold Burson refused to go to the meeting when he heard it was about the Contras.

Also missing is the tossing of hundreds of Silver Anvil entries in the 1980s because minor rules were broken such as a binder being more than three inches deep. Anyone who purchased a Three-Inch Binder got disqualified because PRS, unlike the rest of the world, measured the binder from the outside rather than the inside. The outside measurement is 3.25 inches.

Tens of thousands of dollars of entry fees were kept and the contestants were not even told why they were disqualified. The ODwyer NL exposed this abusive practice by the staff. Member Lou Capozzi spearheaded a move to stop minor flaws from getting an entry tossed.

This site may offer a reward of from $300 to $500 for any PR professor, PR person or grad student who compiles the best list of mistakes of omission and commission in the WP PRS entry. The reward will be offered if we get enough interest in this.