WPP CEO Martin Sorrell, the face of British advertising, plans to officially abandon his Dublin headquarters for London if shareholders approve the move on December 11.

Upset over a Labour Party proposal to tax foreign profits, Sorrell skedaddled to the Emerald Isle in 2008. 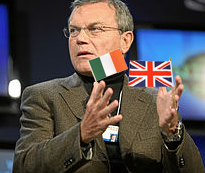 In documentation for the upcoming shareholder meeting, WPP provides the following explanation for its tax dodge:


The Scheme will create a new parent company for the WPP Group, which is registered in Jersey, with its tax residence in the U.K.

In November 2008, a new parent company for the WPP Group was put in place that was tax resident in the Republic of Ireland and as a direct result of concerns for the financial impact for the Group of the then Labour Governments proposals for the taxation of foreign profits. Following the Coalition Governments implementation of a new regime for the taxation of foreign profits, which will be effective from 1 January 2013, the concerns that the Board had in 2008 no longer apply and as a result the Board is proposing to return the headquarters of WPP to the U.K. by means of the Scheme. A return to the U.K. should not have a tax cost for the WPP Group, at least for the remainder of this Government.


Irelands loss will be the U.K.s gain. But Irish financial pain may only be temporary.

The austerity policies of Conservative Party chief David Camerons coalition government havent set the British economy on fire. Exiting Bank of England Governor Mervyn King reported this month that the economy (despite the London Olympics) is to grow at a sluggish one percent this year, and warned of a triple dip recession in 2013.

In his December 5 autumn statement, British Chancellor of the Exchequer George Osborne is expected to blame stagnation from the eurozone crisis for his governments falling short of targets needed to slash debt by 2015.

Where does that leave WPP? If it retakes power, resurgent Labour may revise its double taxation plan. Will Sorrell once again run to the Irish tax sanctuary?