Political posturing from Republican obstructionist Senators John McCain, Kelly Ayotte and Lindsey Graham over the possible nomination of Susan Rice for Secretary of State doesnt auger well for a spirit of GOP cooperation with the Obama White House II. 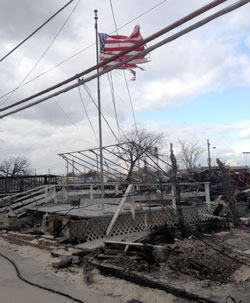 It reflects the Senates fixation on the insider political game and a disconnection with the reality of daily life.

This country has far greater concerns than the GOPs Gang of Threes priorities of either 1) sending a warning shot to Obama that despite the Republican electoral drubbing, the party is still relevant, or 2) forcing the president to dump Rice for Massachusetts Senator John Kerry so the GOP can return Elizabeth Warren-thumped Scott Brown to the Bay State Senate seat. How cheesy!

Can you imagine if the Senators spent a fraction of the time that is being wasted in hounding Rice to pressing matters, such as Hurricane Sandy relief. Sandy isnt a Democratic or Republican matter. It affected 24 blue and red states. Sandy is an American matter.

My family has been volunteering time with Habitat for Humanity, trying to salvage the remaining homes at Breezy Point, Queens. Weve been carrying out damaged furniture, clothing and personal effects to dumpsters, plus knocking down moldy interior walls.

Nobody there is paying any attention to the GOP tussle over Rice, or for that matter any other political shenanigans. They don't expect much from politicos. My daughter, Caitlin, took this panoramic photo of the devastated Breezy Point fire zone, where 122 homes went ablaze on the night of Sandy. The photo was taken from the deck of a house, directly bordering the dead zone.

The picture sure does make the squabbling Republican Senators look small and petty.