The International Association of Business Communicators on Nov. 30 announced that ten staffers had been laid off that day and that six more would leave by March next year when their duties are outsourced.

This would represent nearly one-half of a staff of 30+.

Chair Kerby Meyers and executive director Christopher Sorek said that five new positions would be filled in due course.

Members were e-mailed a 5:13-minute YouTube video in which Meyers and Sorek describe new directions of IABC including a commitment to digitize more materials and make digital the touchpoint for everything that we are going to be doing.

A digital agency has been retained as well as a consultant for a certification program that IABC is recommending to members. Neither firm is identified thus far.

The tape was made during the 2012 World PR Forum in Melbourne last month. It was released Nov. 27.

The announcement came on the heels of the PR Societys delivery of its printed IRS Form 990 tax return for 2011 to ODwyer offices that showed $500k had been trimmed from the Societys payroll in 2011, possibly representing ten or more jobs.

IABC, unlike PRS, does not provide quarterly financial reports. The 2011 tax returns of both groups are not yet available on GuideStar or Foundation Center.

PRS members are told they may obtain the 990 by visiting h.q. or by making a written request for it.

IABCs 990 (PDF) is only distributed to the IABC board. It is not available on the IABC website. A copy has been e-mailed to this website. 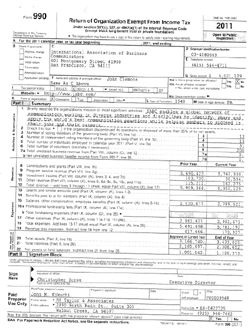 A major benefit offered by IABC and PRS is training in skills needed for the job market. However, numerous web sources now offer PR skill-building programs including PR news media such as PR News and Ragans.

The possibility of networking has been a major draw of the PR groups but Facebook, LinkedIn and numerous social media now provide a means of building personal contacts without having to pay membership fees.

A member of the Texas PR Assn., which folded Dec. 31, 2011 after decades of existence, said it is easier and cheaper to stay in touch via websites like LinkedIn and Facebook.

Social Media Marketing is one of the largest claiming 195,000 members and 20 special interest groups.

Gerald Hamans Innovative Marketing & PR Group claims 150,000+ members. Haman is the founder of more than 30 Innovation Groups on LinkedIn.com with worldwide membership of 250,000+. An adjunct professor of innovation at Northwestern University he also founded SolutionPeople, developer of the Chicago Thinkubator. He is editor of InnovatorsDigest and creator of the Innovation Tool of The Month Club.

PRS fees include $255 national dues, $65 initiation fee and additional fees for section membership. The APR program costs an initial $410 but PRS members are refunded $100 upon completion of it.
IABCs basic rate is $259 but mandatory regional dues are extra as well as chapter dues unless the member is more than 50 miles from a chapter.

Annual costs for a New York City IABC member are $324.

IABC in September announced it was no longer accepting applications for its $500 Accredited Business Communicator program. Current applicants can complete the process.

Gloria Walker, a U.K. counselor, said the program is being revamped to make it fit for the 21st century.


Career Road Map Will Be Given

Meyers, who heads the Communications Refinery in Denver, said IABCs aim is to give members a career road map that will tell them the knowledge and skills they need from college graduation to retirement. A great group of volunteers is building the roadmap, said Meyers.

IABC is directing members to programs of the Reputation Institute.

The Level 1 program in Basic Reputation Management Training is available at the special IABC price of $2,250 (regular price is $2,295. The program, delivered via twelve 90-minute interactive live online sessions conducted by an international faculty of academics and working careerists, covers corporate communication, marketing, strategic planning, social issues and public affairs. Questions are answered at [email protected] or [email protected] Those who complete the program receive certificates.

We are looking to be the best we possibly can, to be the gold standard for the industry around the world, said Meyers.

Digital materials will be high quality and accessible he said, promising an IABC that is more open and transparent.

The PR Society had its annual conference in New York in 1990 and 2004 but chapter leaders have been told New York has been ruled out as a conference site in the future because of high hotel costs.