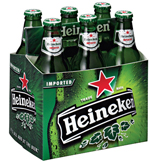 MSLGroup, which is owned by Frances Publicis Groupe, had that business.

The No. 1 independent firm will manage general-market and Hispanic campaigns surrounding consumer-marketing launches and event-sponsorship activations.

He thanked MSL New York for its collaboration in developing impactful programming for brand Heineken.

In other news, Heineken has recruited Justin Kissinger, counsel for the House Democratic Caucus, to head its government affairs operation. He begins Dec. 5.
Before the caucus, Kissinger was an aide to Rep. Shelley Berkley (D-Nev.).