Pinnacle Worldwide, once one of the largest networks of PR firms with more than 40 members worldwide, is down to its last few members and some longtime members doubt it will survive.

The website of the network, based at Northstar Counselors in Minneapolis, is not operative.

Gary Conkling, president of CMF Strategic Communications, Portland, the current president, said there have been mass defections in Europe and the U.S. in recent years.

Some New York firms that were members said they had pulled out and question whether the network has a future.

However, Joe McCarthy, the only remaining founding partner of the group in 1976, said new plans are being drawn up, including a quest for outside financing. 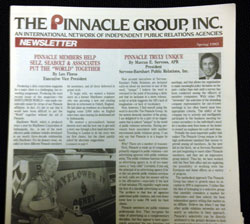 Members previously paid an initiation fee of $5,000 and then annual dues based on size. New members would be associates rather than corporate partners, said McCarthy.

Two of the original partners are working on a new Pinnacle and recently joining were firms in Boston, Cleveland and two from Latin America, he said.

A query has been sent to Johanna Mouton, who succeeded Lynn McCarthy as executive director several years ago, asking for the networks EIN (Employer Identification Number) so that the groups tax returns could be examined.

Pinnacle was formed partly in response to competition from the major firms including those owned by the ad/PR conglomerates that were able to cite owned offices throughout the world.

The independent firms that formed Pinnacle were able to promote cooperation with more than 40 partner firms including more than 20 in Europe, the Middle East, South America and Pacific Rim.