The growing popularity of tablets, smartphones and other devices for accessing content and communicating has opened new doors for PR firms that know how to exploit these new technologies to reach and motivate audiences, said Tom Tardio, CEO of Rogers & Cowan.

Tardio, as head of a firm with a long history of developing strategic marketing and PR campaigns for brands in the converging space of entertainment, technology, consumer marketing and social media, feels that R&C has the right formula to engage consumers via the new media.

Hand held tablets and smartphones including Apples iPad and iPhone, the Samsung Galaxy Tab 7, HP TouchPad, Nexus 7 Nook and numerous others have captured the publics imagination.

People have an unquenchable appetite for entertainment and stories, says Tardio, and they are able to satisfy that now on mobile devices.

Not only are they enjoying their favorite films, TV shows and music on their mobile devices via Hulu, Amazon, Netflix and Rdio when they want, howthey want and where they want, but they are eager to share such pleasures with their friends and families via their social networks and apps, he says.

They are watching their favorite programs on their tablets and smartphones when they have a few minutes to spare and consuming content in more snack size portions, he added.

Applications designed for mobile devices are also proliferating and include reward apps that earn points for watching your favorite television programs that can be redeemed for gift cards and other items, he notes.

R&C creates campaigns for consumer and technology clients that use a variety of entertainment strategies such as developing strategic alliances with entertainment and sports properties, leveraging celebrities social media profiles, executing brand ambassador initiatives, and facilitating relationship building with the broader entertainment community. Both traditional and social media tactics are integrated to support campaign objectives.

R&C, notes Tardio, has worked with many of the top brands in social entertainment for clients such as Amazon Studios, Toyota, Kraft, Avon, Cambio, and The Coca-Cola Company.

Our teams are extremely knowledgeable and adept in how to position these social entertainment brands as well as utilize the various platforms to engage and reach consumers and media, he says.

We are finding that brands are partnering with entertainment marketing/PR agencies because their corporate or technology agencies do not have the depth of knowledge or relationships within the entertainment community or trade and lifestyle media to navigate this industry and communicate their brand stories in this unique media, he added.


New ecosystem emerging
New marketing techniques for brands include developing original, short-form entertainment content/webisodes as a way to engage consumers outside of the typical TV spot or print campaign, he continued.

Since this original content requires tune-in publicity and a focus on online community building, R&C is securing a marketing communications leadership role in this category. There is an entire social entertainment ecosystem being formed that incorporates content creators, mobile app developers, socially enabled devices, TV specific social networks and analytics companies. These have been many of the companies R&C has signed on with in 2012 and which we will continue to expand and build our proprietary skill sets into 2013. 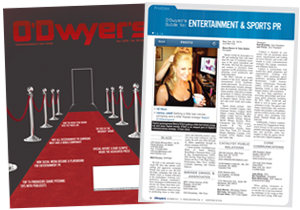 Each month we examine a different area of PR. Issues include practice-area specific feature stories as well as profiles of PR firms with strengths in the focus area of the month.

The agency profiles constitute the ideal starting point for companies beginning their search for PR counsel.

View the 19 entertainment & sports PR firms profiled in our Dec. issue. Don't miss out on profiling your firm in our Jan. '13 Crisis Communications issue!