It may not equal the burning of the Royal Library of Alexandria, which was the most significant depositary of books in the ancient world, but well-respected Wall Street Journal (Dec. 4) architecture critic Ada Louise Huxtable certainly torched New York Public Librarys plan to demolish the storage stacks that house its 5M research volumes underneath its crown jewel 42nd Street library. 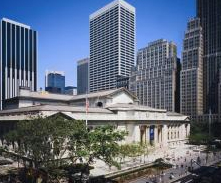 That outrage calls for breaking up the book trove, shipping the least used of the five million specialized research volumes to New Jersey with the promise that requested books would be trucked into Manhattan the next day.

The NYPLs central library plan calls for updating the research facility for the 21st Century by re-purposing the seven floors of stackscompleted in 1911--underneath the wondrous Rose Reading Room into a state-of-the art socially interactive computer centered mid-Manhattan branch with space for writers, seminars, childrens activities and an Internet café. Think of it as a Starbucks with a jungle gym.

The nub of Huxtables beef: A research library is devoted to the acquisition, maintenance and availability of collections of amazing range, rarity and depth, much of which will not be consulted for decades, have not been digitized and probably never will be. It we could estimate how many ways in which the world has been changed by that six percent [the number of books in the collection consulted in a typical year], the number would be far more meaningful than the traffic through its lion-guarded doors.

Huxtable faults NYPL for deplorable communications. Her calls for an interview with NYPL president Anthony Marx or another qualified spokesman were not returned until the head of the Landmarks Preservation Commission intervened, wrote Huxtable. A helpful PR contact then cooperated with Huxtable, but could not respond to repeated requests for the schematic studies of how the empty stacks space are supposed to be used.

The frustrated columnist wrote: The library has been less than forthcoming, and sensitivity to criticism has obviously reached a fever pitch. I have been patient and cooperative, but I believe I have waited long enough.

NYPL used incredibly poor judgment to stiff the distinguished Huxtable, who is right on target with the piece. The research facility is a national treasure, which enhances New Yorks position as the center of scholarship. The librarys strength derives from its massive and consolidated 5M volume collection. A single dusty member of that group could lead to a scientific breakthrough to better the lives of all.

Let the library be. The NYPL should look elsewhere (e.g., the vastly underused 34th Street science, industry and business branch) to develop its wired library of the future.

The plan for 42nd St. sounds like an effort to downgrade or dumb down research.