The studio behind the anticipated Hobbit film preparing for release has moved to counter a widely quoted press report that a screening in a new 3D technology left viewers feeling woozy. 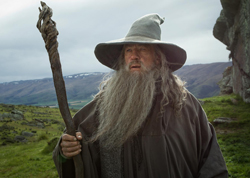 In a statement from Warner Bros. Pictures director of publicity, Stephanie Phillips, today the studio said the film, The Hobbit: An Unexpected Journey, has been screened extensively with extremely positive feedback.

Warner Bros., also speaking for New Line Cinema and MGM Pictures, said none of thousands who have seen the screening in 3D expressed any of the issues described by two anonymous sources in media reports.

The studio has invested a reported $250M in the film, the first in an expected trilogy.

The Sunday Times sparked the spate of negative coverage Dec. 2 with its story of dizzy spells and nausea among a screening audience in New Zealand, where the film was shot, although audience members were not named. The report also quoted reviews posted on Twitter.

The Times report has been widely picked up by global media. In some cases, outlets are quoting other outlets quoting the Times report. USA Today on Dec. 4 referred to the Daily Mail reporting on the Sunday Times in its own article headlined New Hobbit film makes some moviegoers sick.

Some critics have questioned the look of film shot using the new technology, which shoots at 48 frames per second.

Warner Bros. said it will stick with the new 3D technology, calling it a groundbreaking advancement in the moviegoing experience.

Following the initial screening Nov. 28 in New Zealand, a second screening is set for Dec. 12 in London.