Pinnacle Worldwide, founded in 1974 and one of the oldest PR networks, appears moribund but other major networks are thriving.

PR Organization International, with 57 independent partners in 43 countries and combined 2011 fees of $382 million for 4,100 clients, served by 3,200 PR practitioners, is the biggest.

Worldcom, founded in 1988 by firms that left the IPR Group of Companies, owned by Japanese PR counselor Taiji Kohara, said its members billed $227,548,702 in 2011 and were served by 1,965 staffers including 1,391 PR practitioners. Revenues were $525,932 of which considerably more than half were dues. Worldcom, a C corporation, would not reveal its dues structure nor provide a copy of the first page of its income tax return. 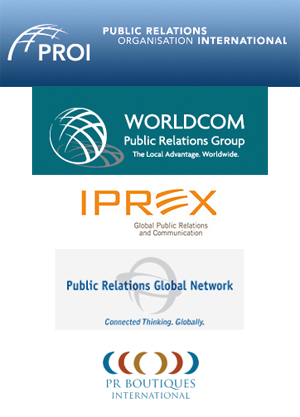 Worldcom has 110 members in 95 cities in 48 countries. It outnumbers PROI in number of member firms but PROI handles more fees because it has focused on signing up large PR firms with many offices such as Adfactors of India, which has 400 PR people in many offices; SPRG, Hong Kong, with 300 staff in offices also in China and Taiwan, and Inforpress, Spain and Portugual, with more than 180 staffers.

One possible reason for the shrinkage of Pinnacle to a few firms could be its high cost--$5,000 initiation fee and quarterly dues of $1,000. Twenty-seven European members of Pinnacle broke away five years ago and formed their own network.

U.S. members of PROI include Gibbs & Soell and Jackson Spalding, which take part in the ODwyer rankings, and Widmeyer Communications, Frause, and the Vandiver Group.

Donna Vandiver, whose firm is in St. Louis, was the 2011 president of Pinnacle. Another ex-member of Pinnacle is 2012 president Gary Conkling of CFM Strategic Communications, Portland. Pinnacles website, www.pinnacleww.com, is down and its h.q. at Northstar Counselors, Wayzata, Minn., does not respond.

Oddly, PROI carries $536,000 as a liability rather than an asset, saying in its 990 that it is building an Education Fund that will be spent some time in the future.

As a 501/c/6 tax-free trade association, PROI is supposed to support the entire PR industry and not just members.

President of PROI until June of 2013 is Robert Frause of Frause, Seattle. Frause is one of the most active members of the PR Society and could even be called the Mr. Ethics of the group.

He headed the Ethics Board for a record six years from 1995-2001 and spearheaded the replacement of the Society's ethics code in 1999 with a new one that had no enforcement provisions. The Society had been hit with a barrage of negative developments in 1999 and declared a press boycott. This caused a member to charge the national board with five violations of the Ethics Code. Rather than hear the charges, the Society declared the Code inoperable and null and void.

Frause again took leadership of the EB in March 2008 when EB chair Gail Baker of the University of Nebraska resigned after a couple of months in the post. She had refused to take press calls.

Worldcom has long claimed the title of being the biggest PR network.

It allows up to 10% of revenues to be from issues advertising commissions. Offices with full-time staffers are required. Stringers are not allowed. Worldcom noted that there were 105 different instances in 2011 where more than one member firm worked with another for the same client.

That shows the real power of the partnership, said Daisy Guthin, chief operating officer, who is retiring next June after 17 years. (Candidates are being interviewed.)

Figures are provided by CPAs of the firms or the CEOs or CFOs. Forty-seven of the member firms bill under $1.5M. Nine bill more than $5M.

Each firm is reviewed by two other member firms every three years to ensure that all operate under the same high quality standards, said Guthin, who noted such standards have been in operation for seven years.

Worldcom, made up of many firms in the International PR Group of Cos. owned by founder Taiji Kohara of Japan, held its first meeting in 1988.

It had more than 50 members in 100 markets and elected Washington, D.C., counselor John Adams as its first chairman. Adams died Dec. 7.

The Worldcom partners bolted from the IPR Group when Kohara put it up for sale. He had founded it in 1959 when his clients wanted more international PR. An expansion took place in 1968. Its members billed a projected $12 million in 1987.

Joe Epley, chairman of IPR/USA, said the 23 U.S. partners would continue on their own no matter what Kohara did. He died in 1988.

IPREX, whose 2012 president is Kathy Tunheim of Tunheim Partners, Minneapolis, has David Watson of the U.K. as its executive director and is administered out of Shorewood, Wis., by Carol Clinkenbeard.

Public Relations Global Network, which was 20 years old this year, reported revenues of $110M+ for its partner firms in 2011. Current president is Mark Paterson of Currie Communications, Melbourne, Australia. David Landis of Landis PR, San Francisco, will be president in 2013.

Members meet in person twice a year and confer with each other during the year on issues that arise.

A new network is PRBoutiques International, which now counts 32 PR firms in 11 countries. Dan Leinweber, president of Leinweber Assocs., Sudbury, Mass., is president of the group.

Leinweber said Rotenberg is an excellent example of the high caliber of boutique agencies that are part of the PRI network.

U.S. members are located throughout the U.S. and in international markets from Korean to Malaysia to the United Arab Emirates and across the European continent, said Leinweber.