The federal agency that produces the Congressionally mandated assessment of U.S. students is preparing to review its $16M+ contract encompassing communications. 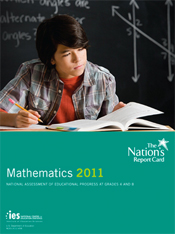 The National Center for Education Statistics, an agency within the U.S. Dept. of Education, administers the report, known in its final state as the Nationals Report Card, although the assessment in its whole is officially titled the National Assessment of Educational Progress.

An RFP is expected to be released on or around Jan. 7, 2013 covering several support tasks for the NAEP, including communications, publication design, and PR for its preparation, release and dissemination.

The current contract is worth $16.4M.

The DOE said a new pact is expected to pay more attention to the web and social media.

Hager Sharp has a current pact with the NAEP. Burson-Marsteller, Fleishman-Hillard, Gibraltar Associates, Lipman Hearne, RF Binder Partners and Vanguard Comms. were among about two dozen agencies and vendors slated to attended an informational conference on Dec. 3.

The assessment gauges subjects including reading and mathematics in two-year cycles, with other subjects like history and civics in four-year cycles  at grade levels, 4, 8 and 12.

The work to be put out for proposals covers the 2013-17 cycle, starting with reading and mathematics in 2013.