The National Rifle Assn. has a golden opportunity on Friday to regain its footing somewhat following the massacre in Newtown. The organizations decision to go dark in the immediate aftermath of the tragedy had a sense of guilt by association ring to it. 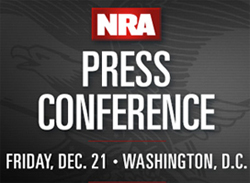 On December 18, the NRA took the first step on the road to reputational recovery, issuing a statement saying it is shocked, saddened, and heartbroken by the news of the horrific and senseless murders in Newtown.

It announced a Dec. 21 press conference and promised to offer meaningful contributions to make sure this never happens again.

Words are cheap. Its time for the NRA to deliver.

The NRA would receive a tremendous PR boost by throwing its support for renewing the ban on assault weapons and mandatory background checks of gun buyers. That would be a true Nixon goes to China moment.

The gun groups premise that guns dont kill people, people do rings pretty hollow these days when a deranged person can get his hands on a gun and use it to slaughter innocents at a school, movie theater, shopping mall or place of worship.

At the upcoming press conference, the NRA would be wise to move from the white hot rhetoric of its long-time leader Wayne LaPierre. He makes former NRA front man Charleton Heston, of my cold dead hands fame, look like a shrinking violet.


Obama himself is no fool. So when he got elected, they concocted a scheme to stay away from the gun issue, lull gun owners to sleep, and play us for fools in 2012. Well, gun owners are not fools, and we are not fooled. We see the president's strategy crystal clear: get re-elected, and with no other re-elections to worry about, get busy dismantling and destroying our firearms freedom. Erase the Second Amendment from the Bill of Rights and exorcise it from the U.S. Constitution. That's their agenda.

That crazy talk is utter nonsense. Newtown is reality, which is something the NRA better face before it becomes a fringe sideshow in the debate on gun control.