Time Warner Cable may be doing the right thing after all, killing its kneejerk decision to drop Current TV from its line-up as Al Gores network is being sold to Qatars Al Jazeera. 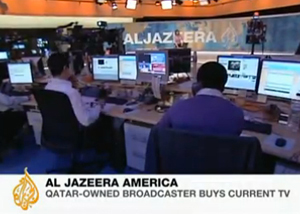 Last night upon hearing the news of the $500M deal, TWC said it was dumping Current TV from its programming as quickly as possible. It gave Current TVs low ratings as the excuse for cutting its programming.

TWCs high-handed decision triggered outrage in cyber-city as the cable company was hammered as a corporate coward out to muzzle the vibrant English language version of the Arab satellite TV.

Geez, arent media companies expected to promote the world of ideas and variety of opinion?

Future Al Jazerra watchers are bound to be exposed to a different way of looking at the world.

Was TWC out to boost its former sister company, CNN?

The flow of Arab cash into the planned new entity called Al Jazerra America based in New York is going to be a headache to CNN and its new programming guru, Jeff Tucker, who is trying to lure former Today show host Ann Curry for a prime-time slot. That same Arab money and some savvy hiring/promotion will dramatically boost the ratings from Current TV levels.

If is sticks with AJA, TWC will have a winner on its hand.

A chastised TWC today is singing a new tune. It released a statement to say: We are keeping an open mind, and as the service develops, we will evaluate whether it makes sense, for our customers, to launch the network.