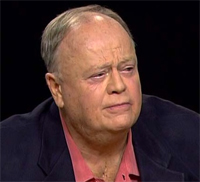 Vietnam vet Cleland, who lost both legs and an arm after he jumped from a helicopter and picked up a grenade that he thought had fallen out of his flak jacket, was the victim of all-time despicable attacks from conservatives, who noted those limbs werent exactly lost while under enemy fire. Those critics were safe and snug during the war, thousands of miles from Vietnam.

The wretched Saxby Chambliss, who defeated Cleland in 2008, ran notorious ads that compared the Democrat to Osama bin Laden and Saddam Hussein because he voted against a Bush homeland security measure. Earlier, Cleland voted to support Bushs invasion of Iraq.

To their credit, John McCain and then Senator Hagel criticized those Chambliss ads, which were then pulled.

Cleland told Talking Points Memo hes pleased that fellow Vietnam vets Kerry and Hagel may turn out to be the Batman and Robin, salt and pepper or Tom Jerry of U.S. foreign/military policy. He expects them to work hand-in-glove to promote the U.S. interest, rather than protecting their individual turf.

According to Cleland, Kerry and Hagel are the kind of people we want withdrawing from Afghanistan and ending this insane war and occupation and focusing the country on using the American military to stay out war, but if we get in war to win war and win it quickly.

Good luck to Kerry and especially Hagel, who soon will face the kind of swift-boat attacks that the Senator from Massachusetts and former Senator from Georgia once faced.

Will Barack Obama stand by his man? Stay tuned.