What a bunch of gutless hacks. 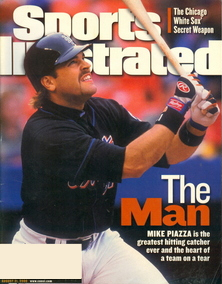 The steroid controversy and a whispering campaign tainted muscular Mike as a roster of admitted/suspected users was denied entry to the Cooperstown shrine. See you later, Barry Bonds, Sammy Sosa, Roger Clemens and Mark McGwire.

The only consolation for Mike was that he got more votes than 2000 World Series nemesis Clemens. Piazza tallied 57.8 percent, while The Rocket picked up 37.6 percent of the needed 75 percent vote. A hunch: if Piazza flung his bat back at Clemens during that Fall Classic hed be currently popping champagne and fielding media calls.

I assumed the vote for Piazza was going to be more of a coronation. The only question: a Met or Dodger hat on his bust. That advantage should have gone to the Metropolitans, where the 12-time all-star played eight full years and hit 220 homers. He played five full-years with Los Angeles and hit 127 four-baggers.

The Mets, who may not run away with the pennant this year, are the second biggest loser after Piazza. Think of all the Piazza all-star shirts, hats and bobble-heads that the tightfisted Wilpon family could have sold this year. Multiple Piazza tribute days would have been pleasant diversions from the anticipated dreariness slated for Citi Field. [BTW, Citigroup this week canned the guy who was responsible for the naming rights to the home of The Amazins.]

For Piazza, its as they used to say in Brooklyn -- Wait Until Next Year -- when the Baseball Writers can get a chance to atone for their sin.