Sard Verbinnen & Co was the top M&A PR advisor in the U.S. for 2012 by both deal value and volume, according to mergermarket, as the firm counseled 123 transactions worth nearly $216B. 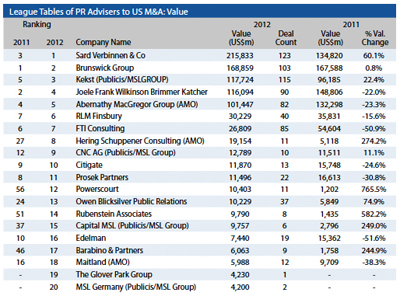 Globally, Brunswick Group topped M&A PR firms in both categories, working 217 transactions worth more than $296B.

Mergermarket said global M&A activity was flat from 2011, while the U.S. saw its best year by value since 2007. In the fourth quarter, alone, U.S. transactions were up more than 45% by value to $305.4B. Energy, mining and utilities were the most active sectors domestically.

Among its big U.S. deals, Sard counseled Softbank Corp. in its $35.5B acquisition of Sprint Nextel (Abernathy MacGregor Group), as well as Equity Residential and Avalonbay Communities in their $16.3B buy of Archstone-Smith Trust (Joele Frank, Wilkinson Brimmer Katcher) from Lehman Brothers. 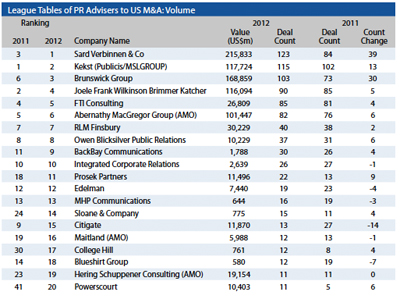 Brunswick, FTI, Pelham Bell Pottinger and Stockwell Communications worked the target in the second largest global deal of the year -- Glencore International's $46B stake in Xstrata. RLM Finsbury repped Glencore. Brunswick also repped Mondelez' Kraft unit in its $26.B spinoff, and Anheuser-Busch InBev in its $20B purchase of nearly 50% of Grupo Modelo.