Feisty Jim DeMint, who quit the Senate for the top slot at the conservative Heritage Foundation, served up plenty of red meat for loyalists at todays Presidents Tour kick-off in New York. 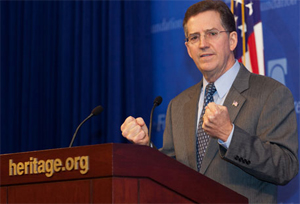 The crowd of Wall Street types ate it up.

DeMint told the audience theyre wasting their money contributing to the Republican party, whichin his viewhas long gone establishment. The firebrand from South Carolina, who expects nothing good is going to happen in D.C. right now, during Obamas second term in office, said a $1 contribution to Heritage would yield a far greater return than a $10K contribution to the GOP.

He chastised Republicans for failing to embrace the Tea Party. The GOP stiff-armed them, while the Democrats vilified them, said DeMint. His full embrace of the Tea Party received a round of applause from the audience, with one member calling out, We must lead them.

Heritage wants to be the power center behind the conservative movement, moving the nation in the complete opposite direction of Obama.

On Obamacare, DeMint predicted it will collapse under its own weight.

Hes ready to embark on the American Perceptions Project to refute stereotypes about what it means to be a liberal or conservative. For instance, conservative-backed ideas help the poor more than anybody else, said DeMint, in noting that black kids in a fifth grade class in Greenville are studying to be engineers--thanks to the rights view of educational reform.

More than 6,500 of Heritages 650K membership base signed up to hear DeMint and current president Ed Feulner, who steps down in April, during their 10 city tour that runs through Feb. 15.

DeMint said conservatives in the blue-state of New York have a right to be discouraged. Feulner contrasted the robust support of fracking in Pennsylvania under GOP Governor Tom Corbett to the squishy position of the Empire States Democratic chief Andrew Cuomo.

Though both states share the same geologic formation, western Pennsylvania is a boom town, said Feulner, while north of the border nothing is happening.

It was a good show.