The star Notre Dame football player enmeshed in a scandal over his apparent relationship with a fictional woman has engaged crisis specialist Hiltzik Strategies. 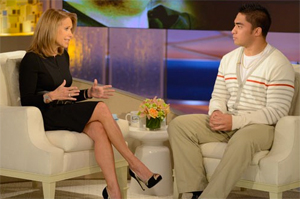 The Notre Dame linebacker, Manti Teo, fell into the media crosshairs last week after Deadspin.com published a thorough examination of Teos relationship with a woman -- widely reported as an inspirational story because of her battles with cancer and recovery from a car accident -- it found did not exist.

He has denied knowledge that the woman and story were fabricated through social media. Notre Dames influential athletic department has backed his denials.

Couric has landed the first sit-down interview with Teo since the scandal broke, set to air Jan. 24. ABC News teased the interview today, indicating Te'o has backed off some of his earlier denials.

Te'o spoke to ESPN last week in an off-camera interview, saying he was not part of the hoax. The New York Times reported that Hiltzik set parameters agreed to by ESPN, including that it be off-air, "in an intimate setting without cameras or a group of technicians" and limited to two minutes of audio used on air. ESPN chief of news Vince Doria said there were no limitations on questions.

Hiltzik helped guide Bieber through an accusation and paternity suit in 2011 and helped Braun weather a suspension by Major League Baseball for alleged use of performance enhancing drugs, which was reversed on appeal.