Theres something demeaning about the coverage of President Obamas inauguration this week. On his historic day, the president was second fiddle. 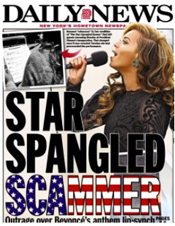 The media focus was on everything but Obamas plans for the next four years.

Beyonces lip-synching controversy (???) of the National Anthem got more play than the commander-in-chief. Her mouthing of the words to the Anthem triggered much phony rage. For those keeping score: the Marine Band went AWOL during Beyonces performance, but Kelly Clarkson (My Country `Tis Of Thee) and James Taylor (America the Beautiful) sang their songs without a hitch. Who cares?

There were lots of bizarre images of Joe Biden and immediate speculation about his potential showdown with Hillary Clinton for the 2016 Democratic nomination. [Theres official word today that Hillarys 2008 presidential campaign has finally retired its $25M debt. The soon-to-be-unemployed Secretary of State now has $204,832 as the beginning of her `16 war chest].

How thrilling was the showdown between Michelle Obama and Ohio Congressman John Boehner? Did the First Lady have the audacity to roll her eyes at the Speaker of the House? According to lip-reader, Larry Wenig, Boehner suggested to the president that Michelles tight control over hubby is the reason that he probably didnt smoke a few cigarettes on the morning of his big day. Really?

Mondays sideshows won the media day, which is troubling. Must every single political event be broken down into bogus controversies or personal slights? Does entertainment have to be the national priority 24/7? Lord knows there are big issues to face in 2013. Lets get on with it.

Its time for the media carnival to pack up its tent.