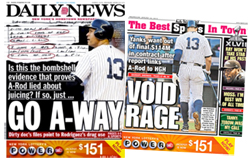 The newspaper claims it received records from a former employee at a now shuttered Coral Gables, Fla., anti-aging clinic that allegedly lists drugs distributed to A-Rod and five other Major League baseball players.

The operator of the Biogenesis of America facility, Anthony Bosch, has criticized the MNT story as filled with inaccuracies, innuendos and misstatements. He also denies that he treated A-Rod.

Rodriguez, who recently had a second hip surgery, may be out for upcoming baseball season. The Yankees inked Rodriquez to a ten-year $275M contract in 2007.

S&C CEO Mike Sitrick and Terry Fahn, a senior member of the firm, are working with Rodriguez.