A PR storm is blowing up in Atlanta involving Popeyes, a chain of fried chicken fast food restaurants whose VP-communications Alicia Thompson may help to serve fast food for the mind to PR students looking for unpaid internships and career advice. 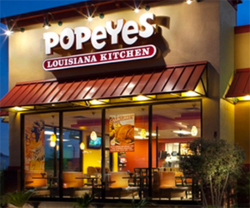 
Bachelder could not be reached for comment today. Her assistant said she was out of the office and referred the call to Thompson.

We hope to get the attention of AFC executives in this because we dont think they want to be involved in delivering half-baked information any more than they would serve half-baked food.

There is no panel on how to start a business and prospect for accounts among local business people. Why work for someone else who will only multiply your hourly rate by three times (or more) when you could work directly for the business owners?

Ironically, many of the grads are shouldering large debts for their education and will end up working for peanuts for fast food outfits like Popeyes (if theyre lucky).


Coke Pitch a Waste of Time

Kate Hartman, global PR senior manager for Coca-Cola, is to talk about the companys support of the 2012 Olympics in London, explaining how the communications experts at Coca-Cola brought teens closer to the Olympic Games through a multi-platform campaign that featured on-the-ground activities and digital initiatives to bring the spirit of the games to millions

No doubt Coke did all those things but what has this got to do with students seeking internships and looking for jobs? The time could be better spent telling students how to open their own businesses. They need to know how to set up books and pay estimated taxes quarterly, how to obtain a sales tax or Employer Identification Number, among other things.

Journalism as well as PR majors face the prospect of being on their own. More than 80 members of the New York Financial Writers Assn., or about a third of the members, are freelance when no such category existed a couple of decades ago. The members are experienced writers and reporters with bylines in many major publications. But full-time employment evades them.

If Coke wants to talk about PR, it should discuss the op-ed piece in the New York Times Jan. 29 which accuses it of buying the NAACP. When Jim Crow Drank Coke, by Prof. Grace Hale, University of Virginia, claims that the opposition of NAACP/New York State to New York Mayor Bloombergs drive to restrict sales of sugary drinks can be traced to Cokes support to African-American organizations.

One of the Real World sessions is on the difference between corporate and agency PR. For a sample of corporate PR, a student could check the Coca-Cola website where he or she will find no names and only a box for reporters or others where questions can be submitted. There is also a phone number and we left a message there last week, receiving no reply as yet.

There are 17 Coke PR staffers in the Society database, including senior VP PA and communications Sonya Soutus, who has opted out of supplying her e-mail address. Kent Landers, group director, corporate media relations, and Judith Snyder, group director, global brand PR, also opted out of e-mail. We submitted the following questions to the Coke question box:

This is reporter Jack O'Dwyer of odwyerpr.com. Does Coke have a response to the editorial in the NY Times Jan. 29, 2013 saying that Coke's contributions to NAACP/New York are the reason it is opposing NY Mayor Bloomberg's campaign to limit the size of sugary drinks? The link is http://tinyurl.com/ctuwnhs

Current plans for the career day do not mention anything about a literature table and we think one is imperative. Thompson said today there might be a literature table next year. The ODwyer Co. would donate copies of its products and were sure the other PR publishers would do the same. More than 200 students are expected from throughout the state. At the end of the day, the directories and other publications can be raffled off based on student names dropped into a box.

Heres an initial list of items that should be available:

--Ten copies of the 2011 and 2012 ODwyers Directory of PR Firms, a 360-page directory of 1,700 firms sorted by size, geography, 12 special practice areas (health, tech, food, etc.) and containing more than 500 extensive descriptions by firms of what services they offer. It is often called the No. 1 job-seeking guide in PR and is in its 42nd annual edition.

--Ten copies of the 2012 Contact directory of PR Week/U.S. which has corporate and non-profit contacts as well as those at PR firms. PRW has announced the directory will be online only from now on but it should have 2012 copies still available.

--Ten copies of the 2005 or other editions of the PRSA BlueBook of 20,000 members, a prime job-hunting tool for PR people and which PR professors made available to their students. The cancellation of the printed directory as of 2006 brought howls from the professors who gave 14 reasons why the directory should be available in print or as a PDF. The Society ignored them. The Society used to give copies to the press but such information is no longer available because reporters are not allowed to join. There are 75 PR practitioners among the 312 members of the Atlanta Press Club.

--Ten sets of the 12 ODwyer's magazine issues, each one focusing on a specialty. The January issue has the PR Buyers Guide listing nearly 1,000 PR products and services. There are many jobs in the more than 100 service companies listed.

--Ten copies of "Army of Entrepeneurs" by Jennifer Prosek showing the non-stop effort at PR firms to meet and win new clients and build current accounts by offering more services. The agency mindset, attitudes and work practices are far different from those in a corporate or institutional setting. The great bulk of PR jobs are in the agencies these days. One way to land such a job is to bring in an account.

There should also be copies of other books that speak to the reality of the PR industry including "Always Live Better Than Your Clients," the story of the then most successful PR counselor ever, Ben Sonnenberg; "Deadly Spin," by Wendell Potter, who details the good and bad of 20 years of PR at a major corporation, CIGNA; "The Power House," a biography of Bob Gray, who became the most powerful PR person in D.C. in the 1980s, and "The Tylenol Mafia," by Scott Bartz, a seven-year employee of Johnson & Johnson who has 719 pages of evidence that the Tylenol poisonings of 1982 took place while the Tylenols were still in the J&J distribution chain. Wikipedia has recognized the book but no major media. The reasons for this snubbing is an issue PR and journalism students should explore.

The ODwyer Co. will compile other materials that will be of help to jobseekers. They need all the information they can get.

There should also be a printout of the 56 PR and communications online groups in the LinkedIn group directory. Innovative Marketing, PR Sales, Word-of-Mouth Buzz Innovators claims to be the largest with more than 150,000 members.


Nall Will Speak at Conference